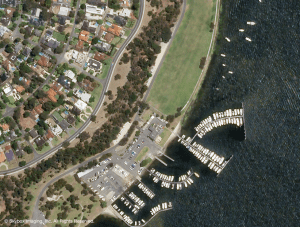 Beaton Park, Perth, Australia, is shown here in one of the first SkySat-1 images acquired on Dec. 4, 2013.

SkySat-1, the first of Skybox Imaging's planned constellation of 24 satellites, is one of the world's smallest satellites capable of capturing sub-meter Earth imagery.

Although the images are untuned and aren't yet calibrated, features are clearly discernible that validate the company's goalÂ to provide high-quality, sub-meter imagery.

SkySat-1 was launched Nov. 21, 2013, from Yasny, Russia, aboard a Dnepr rocket. Mission specialists made contact with the spacecraft on the first pass and completed bus commissioning within days. Once the payload door was opened, initial images were captured within hours.