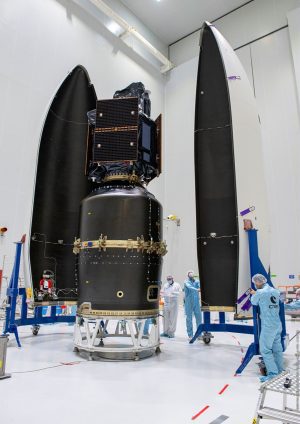 SEOSAT-Ingenio, the new Spanish high-resolution land-imaging mission scheduled to launch on Nov. 17, 2020, carries a state-of-the-art dual camera that can image Earth's land with a resolution of 2.5 meters. The satellite will benefit society through numerous disciplines such as cartography, agriculture, forestry, urban development and water management.

Since its arrival at the launch site in September, SEOSAT-Ingenio was put through a series of tests to make sure it is in good working order. Around two weeks ago, the satellite was fully fuelled, after which it was transferred to the Payload Processing Facility and was mated on top of the upper part of the Vega Secondary Payload Adapter.

SEOSAT-Ingenio was then encapsulated in the rocket fairing, which protects it during the first part of the launch. The entire launch campaign team was there to wish farewell to the spacecraft as it was sealed from view.