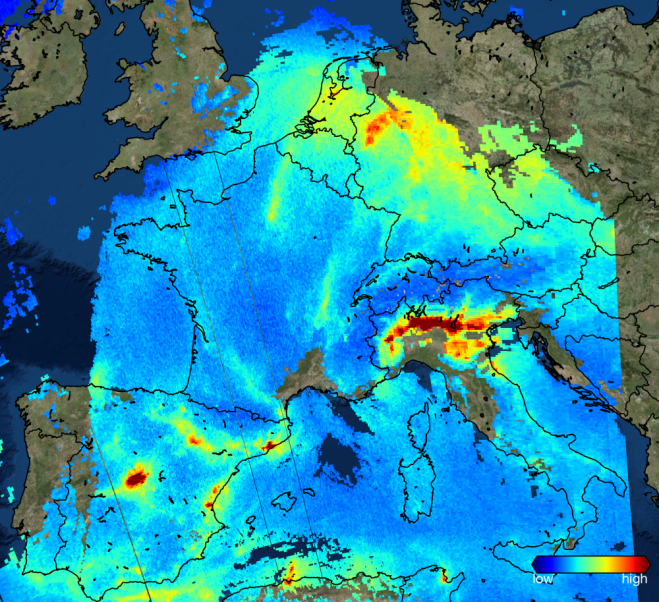 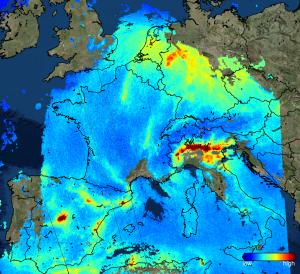 One of the first images from the Copernicus Sentinel-5P mission shows nitrogen dioxide over Europe on Nov. 22, 2017. It shows high emissions over the Po Valley in northern Italy and over western Germany. Nitrogen dioxide pollutes the air mainly as a result of industrial fossil fuel combustion and road traffic. There are some gaps in the coverage here because Sentinel-5P can’t image through clouds. (Credit: Contains modified Copernicus Sentinel data (2017), processed by KNMI/ESA)

Launched on Oct. 13, 2017, the European Space Agency (ESA) Sentinel-5P satellite has delivered its first images of air pollution. Although the satellite is still being prepared for service, these first results have been hailed as exceptional and show how this latest Copernicus satellite is set to take the task of monitoring air quality into a new era.

“Sentinel-5P is the sixth satellite for the EC Copernicus environmental monitoring program, but the first dedicated to monitoring our atmosphere,” said Josef Aschbacher, ESA’s Director of Earth Observation Programmes. “These first images offer a tantalizing glimpse of what’s in store.”

Sentinel-5P carries the most advanced sensor of its type to date: Tropomi, which can map pollutants such as nitrogen dioxide, methane, carbon monoxide and aerosols, all of which affect the air we breathe and our climate.