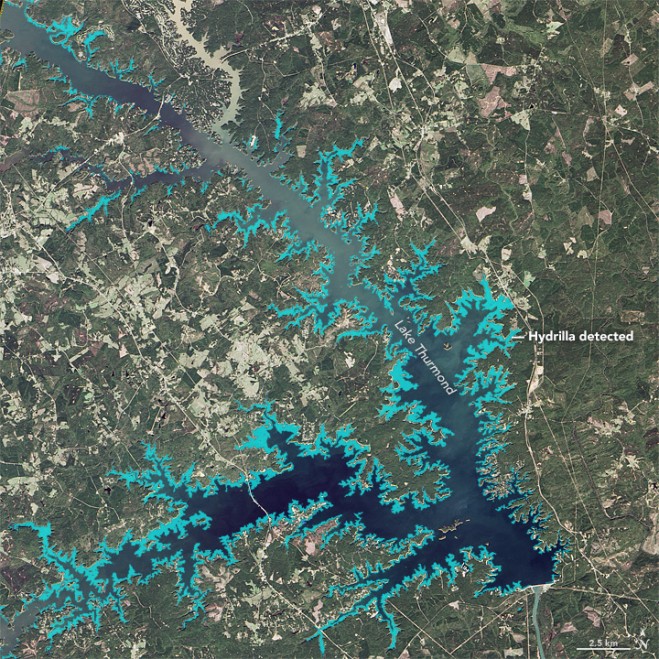 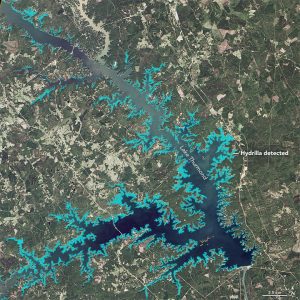 The Operational Land Imager (OLI) on the Landsat 8 satellite acquired this image of Lake Thurmond. Blue overlays show the extent of Hydrilla that particular month. (Credit: University of Georgia/NASA/USGS/Landsat 8 – OLI)

Scientists have deduced that the birds are consuming a toxic cyanobacteria that lives on Hydrilla verticillata. The toxin causes a neurodegenerative disease and ultimately death in the water birds that ingest it. Eagles don’t eat the plants, but they prey on other birds, and many eagles have been found dead in the vicinity of Lake Thurmond.

To help lake managers know where to focus their efforts, researchers at the University of Georgia used satellite images to develop a new way to assess the distribution of Hydrilla across the lake. The project was part of NASA’s DEVELOP program, in which recent college graduates and early career professionals use NASA satellite observations to address an environmental or public policy issue.

Hydrilla grows in fresh water on every continent except Antarctica, and it has been found in at least 30 U.S. states. The plant tolerates a wide range of temperature, nutrient, salinity and turbidity conditions, and it can grow as fast as one inch per day. In Lake Thurmond, the plant can be found in 11,200 of the lake’s 71,000 acres. The U.S. Army Corps of Engineers has used herbicides to temporarily control the plant’s growth at boat ramps and swimming areas, but the impact on birds has encouraged investigation into treatments that would be more widespread and long-term.