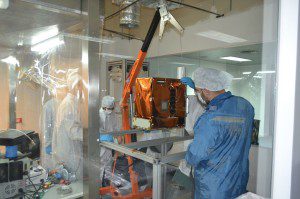 Among the 30-plus small satellites carried into orbit by the most recent KosmotrasDnepr launch was BugSat 1, the third prototype for Argentinian startup company Satellogic.

Emiliano Kargieman, founder and CEO of Satellogic and co-founder of Core Security, is actively planning the build-out of a constellation of hundreds of Earth imaging satellites.

We are envisioning scaling up the constellation to hundreds of satellites, maybe on the order of 300 satellites; [this] will allow us to provide real-time imaging, Kargieman told Via Satellite. By 2015 we'll have our initial constellation of satellites providing services and, by 2017, I hope to scale that up to the point where we can be near our mission of providing real-time imagery.

Satellogic joins a growing list of entrepreneurial satellite companies such as Planet Labs, Dauria Aerospace and Skybox Imaging”which recently was acquired by Google”that are planning extensive Earth imaging constellations. In 2013 Satellogic launched its first two prototype spacecraft, CubeBug 1 and CubeBug 2. Kargieman said the latest satellite, known as BugSat 1 or Tita, will validate the company's work to both the market and investors.

We've been implementing this incremental development approach toward building our satellite constellation, he said. So, in the first two satellites we tested out part of the components that will be part of the final configuration. In this third satellite, this is the first prototype that is feature-complete, where we can test end-to-end not only the whole satellite platform, but also the payload.

The final satellites are planned to provide high-resolution imagery as well as video on a real-time basis. Satellogic began working with customers on co-developing applications for the service constellation, which it plans to start launching next year. Kargieman said part of the company's plan to keep costs down while achieving the scale of hundreds of satellites is through keeping the satellite manufacturing process in-house.