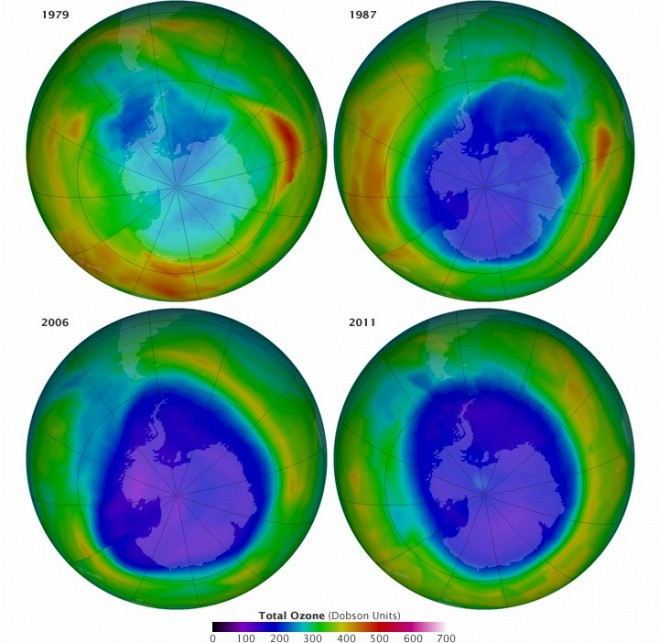 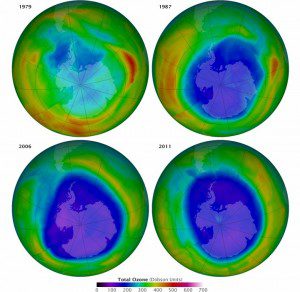 The images above show the Antarctic ozone hole on Sept. 16 (the International Day for the Preservation of the Ozone Layer) in the years 1979, 1987, 2006 and 2011. The first two maps are based on data from the Total Ozone Mapping Spectrometer on the Nimbus-7 satellite. The other two maps are made with data from the Ozone Monitoring Instrument on the Aura satellite. Though taken by different instruments, the data sets have all been cross-calibrated and reanalyzed by scientific models.

According to NASA scientist Pawan Bhartia, “The Antarctic hole is stabilizing and may be slowly recovering. Our focus now is to make sure that it is healing as expected.”

Twenty five years ago, scientists and policymakers unveiled what the United Nations calls “the most successful treaty in UN history.” OnSept. 16, 1987, the first 24 nations signed on to the Montreal Protocol on Substances that Deplete the Ozone Layer; 173 more have signed on in the years since. The international agreement likely saved the world from an environmental crisis, while setting an example for how to develop and implement environmental policy.

Prompted by scientific observations from the laboratory, the ground, aircraft and satellites, the Montreal Protocol first reduced and then banned the chlorine- and bromine-based chemicals, particularly chlorofluorocarbons (CFCs), that destroy atmospheric ozone.

The destruction of the ozone layer allows more of the sun’s ultraviolet radiation to reach the planet’s surface, increasing the risk of sunburns, skin cancer and eye damage. The most prominent and infamous sign of depletion is the annual “ozone hole” that forms around the South Pole.