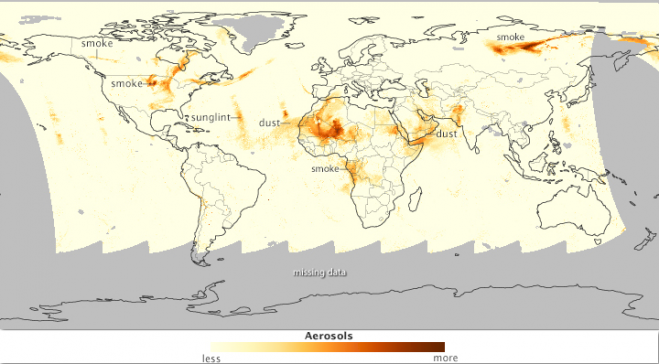 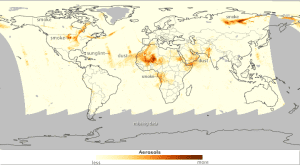 In mid-July 2014, the skies were ripe with aerosols, according to Colin Seftor of NASA’s Ozone Mapping and Profiler Suite (OMPS) science team. This image shows the aerosol index for July 19, as measured by OMPS on the Suomi NPP satellite. The denser the atmosphere’s aerosol level, the darker the shade of orange.

Twenty years after developing instruments that could monitor Earth’s ozone layer, scientists learned they could use the same observations to detect ultraviolet-absorbing aerosols in the air such as volcanic ash, dust and smoke.

The aerosol index isn’t a strict numerical measurement; that is, it doesn’t count particles, but instead provides a qualitative measure of how dense aerosols may be over a given area. Although the index lacks some precision, it has the benefit of seeing aerosols over and around clouds.

With these measurements, researchers can examine the movement of aerosols over time and space, and even make some general trend assessments. Researchers can work backward along a trail of airborne particles and figure out the source as well as provide useful information for aviators who need to steer clear of debris like volcanic ash.