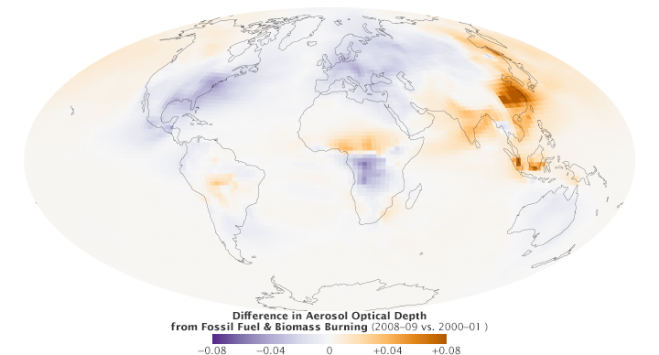 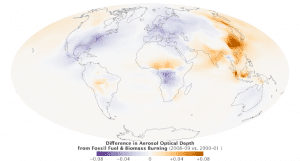 This map illustrates some of the key trends seen in the global distribution of anthropogenic (human-caused) aerosols between 2000–2001 and 2008–2009. Areas where aerosol levels increased are shown in orange; areas where they decreased are blue.

Air pollution is one of the world’s greatest environmental health risks. So how does exposure to air pollution vary around the world and how has it changed over time?

Because many countries lack robust networks of ground-based air pollution sensors, this has been a difficult question for atmospheric scientists to address. But in recent years, satellites have started making uniform observations of air pollution on a global scale. When combined with increasingly sophisticated computer models, the data have started to provide some answers.

One important type of pollution is particulate matter, a complex mixture of airborne solid and liquid particles. Although satellites don’t directly measure particulate matter near Earth’s surface, they can provide information about the overall abundance of aerosols, a general term for airborne particles that includes particulates. For instance, several satellites make observations of aerosol optical depth, a measure of how aerosols absorb and scatter light.