June 11, 2014
Satellites Take the Temperature of the Hurricane Pool 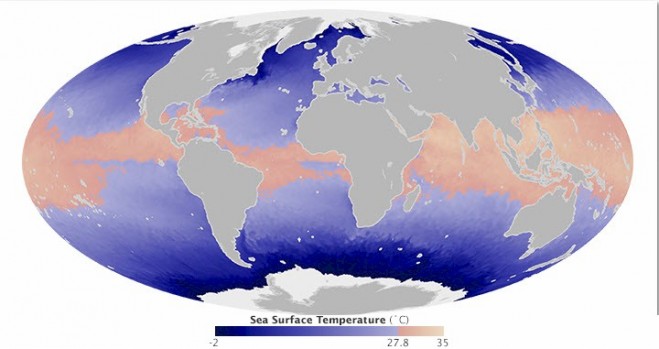 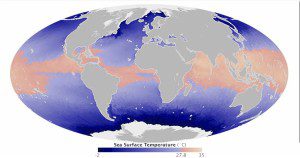 This map was built with data from the Microwave Optimally Interpolated SST product, a NASA-supported effort at Remote Sensing Systems. The research team combines measurements from NASA’s TRMM Microwave Imager, the U.S. Navy’s WindSAT instrument on the Coriolis satellite and the AMSR2 instrument on Japan’s GCOM-W. All three sensors observe emissions of microwaves from the sea surface to capture the temperature of the top few millimeters of the water. Scientists generally agree SSTs should be above 27.8°C Celsius (about 82 degrees Fahrenheit) to promote hurricanes and cyclones.

According to the meteorological calendar, hurricane season began on May 15, 2014, in the Eastern Pacific Ocean and on June 1, 2014, in the Atlantic Ocean. But are the oceans ready for the season?

As of May 30, 2014, hurricane-ready waters in the Atlantic basin were concentrated in the Caribbean, along the Florida coast, and across the equator between Africa and South America. In the Eastern Pacific, the fuel for hurricanes stretched the length of Central America. In the accompanying image, note how the supply of hurricane-ready waters are much broader and more substantial in the Western Pacific and North Indian ocean basins, where every season is typhoon season.

“Sea surface temperatures (SSTs) are one of the parameters that forecasters use to look at the fuel available for storm intensification,” said Scott Braun, a research meteorologist and leader of NASA’s Hurricane and Severe Storm Sentinel (HS3) campaign. “A more relevant parameter is ocean heat content, which is a measure of not only the warmth of the ocean but the depth of the warm layer. You can have very warm SSTs, but if the warm waters are shallow, the hurricane will readily mix colder water to the surface and quickly eliminate the fuel for the storm.”