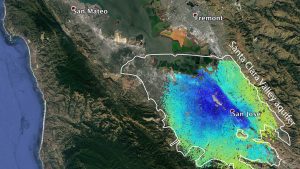 Underground water reserves in California's Silicon Valley rebounded quickly from the state's recent severe drought, demonstrating the success of aggressive conservation measures, according to a new space-based study by NASA and university scientists.

Using satellite data from COSMO-SkyMed, a constellation of four Italian Space Agency satellites, a research team led by Estelle Chaussard at the University at Buffalo in New York, and including scientists from NASA's Jet Propulsion Laboratory in Pasadena, Calif., used synthetic aperture radar interferometry to monitor the entire Santa Clara Valley aquifer near San Jose from 2011 to 2017.

This type of radar can capture the subtle up-and-down movements of Earth's surface of a few millimeters that occur when water levels rise or fall underground. The scientists used hundreds of radar images to calculate how much the land surface elevation changed over time. The measurements show the aquifer began to rebound in late 2014, when the drought was still going strong, and that groundwater levels had returned to pre-drought levels by 2017, thanks to conservation measures that intensified in 2014 as well as heavy winter rains in 2016.

The research was published Sept. 25, 2017, in the Journal of Geophysical Research – Solid Earth. Other participating institutions include the University of California, Berkeley; Purdue University; and the Santa Clara Valley Water District.