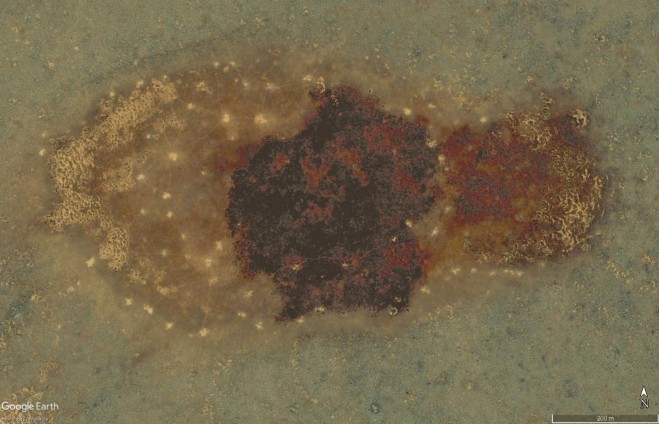 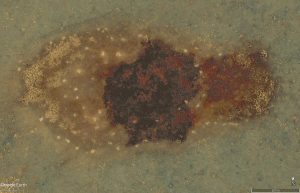 A satellite image from about 45 kilometers northwest of Eucla shows a large number of wombat burrows that have been constructed in a claypan depression.

“I’ve essentially tracked how the population of Southern Hairy-Nosed Wombats has changed since European settlement, and I am looking at the impact in the future of things like climate change and land-use change,” said Swinbourne.

The PhD candidate said wombat burrows were clearly visible on modern satellite pictures, giving him a starting point for the count without leaving his desk.

“We can use Google Earth, Google Maps and other satellite tools to search whole regions, whereas in the old days you’d have to walk the ground—some places were inaccessible so you could never get to them or you’d have to pay for aircraft to fly over, which was prohibitively expensive,” added Swinbourne. “We’ve been trying to work out how many wombats there might be per burrow and that’s where the motion activated cameras come in.

“We’ve installed them outside warrens all across the country to find out what the wombats are doing, how many animals are using a burrow at any one time or how often they are used.

“Then we can count how many burrows there are, do the calculation, and that gives us a pretty good estimate of the size of the population—there’s about 0.4 wombats per active burrow.”

Swinbourne has also utilized ground penetrating radar, which is more typically used for geophysical research, to map the underground burrows of wombats without disturbing them. He said this had shown some burrows to be complex networks with multiple chambers and a labyrinth of interconnecting tunnels.