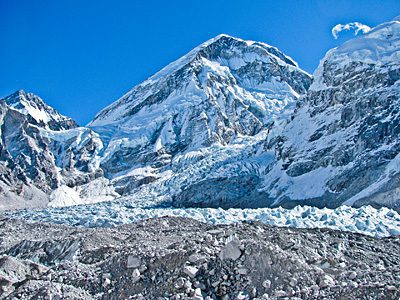 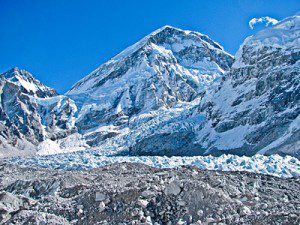 The Khumbu ice fall, Khumbu Glacier, is part of the HKKH region near the Mount Everest Base Camp.

Glaciers are one of the largest reservoirs of freshwater on our planet, and their melting or growing is one of the best indicators of climate change. However, knowledge of glacier change has been hampered by lack of data, especially for understanding regional behavior.

Measurements from satellites have recently provided the first overview mapping of thickness changes of Himalayan glaciers. In a study published in Nature Aug. 23, scientists assembled new datasets from Earth-observing satellites and found that glaciers in the Hindu Kush–Karakoram–Himalaya region (HKKH) lost 12 gigatonnes per year over the period 2003–08, much faster than previously reported.

The HKKH is a 2,000-kilometer-long group of mountain ranges in Asia that contain about 60,000 square kilometers of glaciers, glacierets and perennial surface ice in varying climatic conditions. These ice masses exhibit a complex response to climate, and this makes it difficult to analyze changes in the region. Satellite data provide a way to make these regional assessments and obtain the first spatially resolved mass budget over the entire HKKH.

Image courtesy of K. Casey and the European Space Agency.