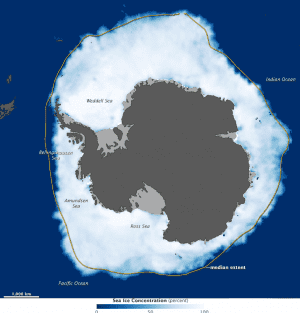 A map shows sea ice extent around Antarctica on Sept. 26, 2012, when ice covered more of the Southern Ocean than at any other time in the satellite record. Based on an NSIDC analysis of data from the Special Sensor Microwave/Imagers flown in the Defense Meteorological Satellite Program, the map shows land as dark gray and ice shelves as light gray. The yellow outline shows the median sea ice extent in September from 1979 to 2000. Sea ice extent is defined as the total area in which the ice concentration is at least 15 percent.

Two weeks after a new record was set in the Arctic Ocean for the least amount of sea ice coverage in the satellite record, Antarctic ice conversely achieved record high levels.

According to a recent study by Claire Parkinson and Donald Cavalieri of NASA's Goddard Space Flight Center, Antarctic sea ice increased by roughly 17,100 square kilometers per year from 1979 to 2010. Much of the increase occurred in the Ross Sea, with smaller increases in Weddell Sea and Indian Ocean. At the same time, the Bellinghausen and Amundsen Seas have lost ice.