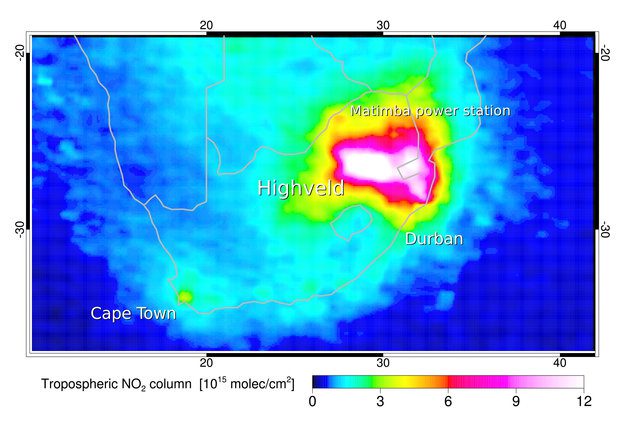 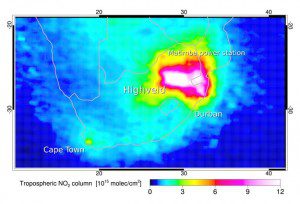 This 2011 image shows measurements of nitrogen dioxide concentrations acquired by the GOME-2 instrument aboard the MetOp-A satellite. High values are found in the Highveld region, South Africa’s economic center, where large cities and heavy industry are concentrated. Due to prevailing westerly and northwesterly winds, air pollution is transported over a large area.

South Africa’s economy is rapidly growing. From 2002 to 2012, the country’s gross domestic product grew by about $270 billion. Unfortunately, a strong economy often leads to high levels of air pollutants, which can influence regional air quality and impact global climate change.

Over the industrialized Highveld region, satellites show concentrations of the air pollutant nitrogen dioxide comparable to those observed in Europe, eastern North America and southeast Asia. With such high levels of air pollution, it’s important to monitor the emissions that cause them.

Emission inventories are used to describe the location and magnitude of emissions from various origins, such as traffic, forest fires or industry. These inventories then are used for scientific atmospheric models as well as by policy makers to evaluate the effectiveness of air quality improvement initiatives and decide on future strategies.

Emission inventories usually are compiled from large amounts of statistical data but are limited by the lack of continuity. Furthermore, events such as forest fires or extreme weather aren’t taken into account. In addition, economic developments, such as recession or the closing of factories, directly affect atmospheric composition but aren’t accounted for by common emission inventories.