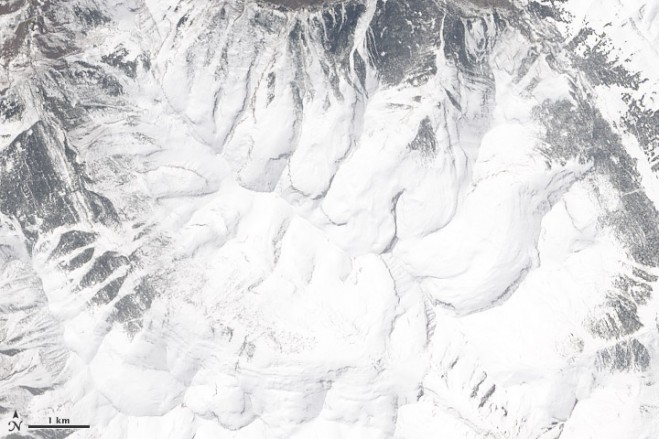 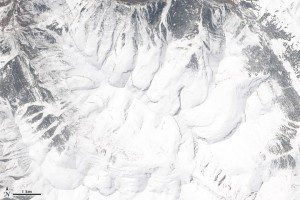 Fresh snow reflects 80 to 90 percent of the sunlight that falls on it. This Landsat 8 image shows the mountains near Telluride, Colo., on May 3, 2013.

NASA and UCLA Researcher Tom Painter are interested in the purity of snow, so Painter studies how much water is stored in snowpack and how that snow looks to satellites. 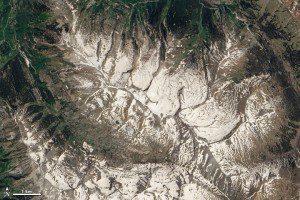 Dusty snow only reflects 50 to 60 percent, absorbing the rest. This Landsat 8 image shows the same mountains near Telluride, Colo., on June 20, 2013.

The purity of snow has consequences for society. Snow is a key source of water for drinking and irrigation. It is also Earth’s best method for reflecting sunlight back into space.

Painter also studies the effects of light-absorbing impurities—dark-colored particles like dust and soot that coat snow. Dirty snow usually melts faster than fresh snow because it absorbs more energy from the sun, and that’s not just a problem in sooty, gritty cities. Except for some mountains and high plateaus, snow cover naturally retreats from Earth’s surface in the spring and early summer. Dust on top of that snow significantly accelerates the process.

For nearly a decade, Painter and colleagues have been examining the effects of snow impurities in the mountains of the Colorado River Basin, using a combination of ground-based measurements, energy-balance towers and satellite data. Aircraft-mounted instruments also have helped monitor snow cover and depth. All of that information is included in a computer model that Painter and his team use to estimate how much impurities enhance snowmelt.