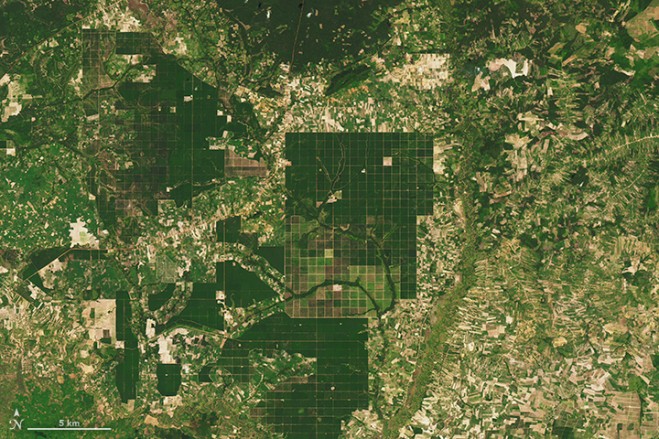 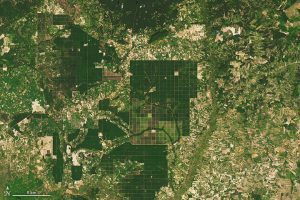 The Operational Land Imager (OLI) on Landsat 8 captured this image showing how a Cambodian forest has been replaced by a grid-like pattern of roads and fields as well as large-scale rubber plantations. (Credit: NASA Earth Observatory images by Joshua Stevens using Landsat data from the U.S. Geological Survey and Global Forest Watch)

Scientists from the University of Maryland and the World Resources Institute’s Global Forest Watch have been using Landsat satellite data to track the rate of forest loss, demonstrating that changes in global rubber prices and a surge of land-concession deals have played key roles in accelerating Cambodia’s rate of deforestation. Concession lands are leased by the Cambodian government to domestic and foreign investors for agriculture, timber production and other uses. Researchers found that the rate of forest loss within concession lands was anywhere from 29 to 105 percent higher than comparable lands outside the concessions.

Work by Matthew Hansen and his University of Maryland Global Land Analysis and Discovery (GLAD) lab played a key role in revealing the scope of deforestation. In conjunction with the World Resources Institute, GLAD developed a weekly alert system: deforestation is detected by satellites with each new Landsat image, and users can subscribe for email updates. The freely available alert system already is operating for Congo, Uganda, Indonesia, Peru and Brazil. The researchers hope to have the system operating for Cambodia and the rest of the tropics in 2017.