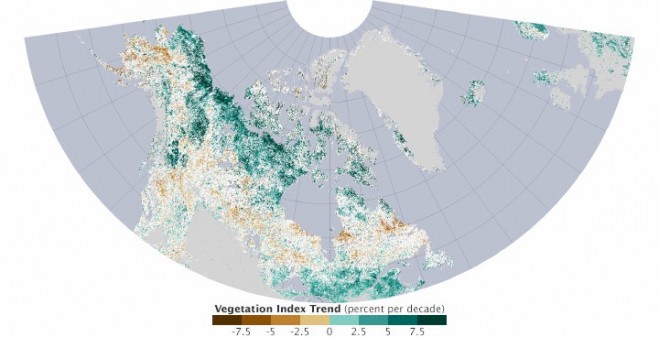 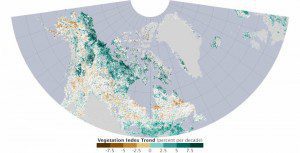 The map above shows NDVI trends between July 1982 and December 2011 for the northern portions of North America. Shades of green depict areas where plant productivity and abundance increased; shades of brown show where photosynthetic activity declined. There was no significant trend in white areas, and gray areas weren’t included in the study.

During the last three decades, temperatures have risen faster in the Arctic than anywhere else on Earth, resulting in a longer growing season and bringing major changes to far-north ecosystems.

For decades, instruments on various NASA and NOAA satellites have continuously monitored vegetation from space. The Moderate Resolution Imaging Spectroradiometer (MODIS) and Advanced Very High Resolution Radiometer (AVHRR) instruments measure the intensity of visible and near-infrared light reflecting off plant leaves. Scientists use that information to calculate the Normalized Difference Vegetation Index (NDVI), an indicator of photosynthetic activity or “greenness” of the landscape.

The accompanying map of the northern points of North America show a ring of greening in the treeless tundra ecosystems of the circumpolar Arctic—the northernmost parts of Canada. Tall shrubs and trees started to grow in areas that were previously dominated by tundra grasses. The researchers concluded that plant growth had increased by 7 percent to 10 percent overall.

Oddly, many boreal forests greened, but the trend wasn’t as strong as it was for tundra of the circumpolar Arctic. Some North American boreal forests actually experienced “browning” (less photosynthetic activity) over the study period. Droughts, forest fire activity, animal and insect behavior, industrial pollution and several other factors may have contributed to the browning.

An international team of university and NASA scientists published an analysis of the NDVI data in Nature Climate Change in March 2013.