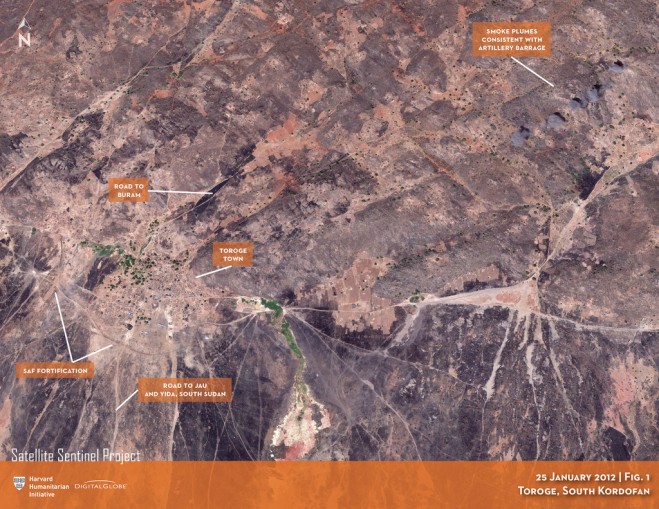 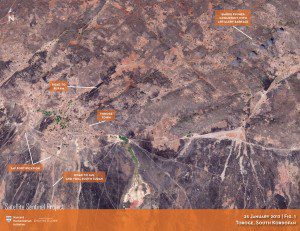 A DigitalGlobe satellite image, analyzed for the Satellite Sentinel Project (SSP) by the Harvard Humanitarian Initiative, shows a line of six gray smoke plumes on a ridge above the town of Toroge.

The DigitalGlobe satellite image, analyzed for the Satellite Sentinel Project (SSP) by the Harvard Humanitarian Initiative, shows a line of six gray smoke plumes on a ridge above the town of Toroge. The image is consistent with reports of recent fighting in the area.

SSP’s new satellite imagery also shows that civilian structures in the town appear to be abandoned and that Sudan Armed Forces (SAF) has created what appears to be a chokepoint, with apparent artillery, main battle tanks and infantry fighting vehicles controlling the main evacuation route for refugees attempting to flee into South Sudan.

In addition, the latest SSP report includes a new satellite image of a plane in flight. It appears to be consistent with an An-24, or Antonov, a type of aircraft reportedly used by SAF to indiscriminately bomb Nuba civilians.

Enough Project co-founder John Prendergast stated, “The Sudanese army’s chokepoint just 45 kilometers, or 28 miles, north of the Yida refugee camp in South Sudan shows that the estimated 200,000 civilians in the Nuba Mountains of South Kordofan are cut off from receiving humanitarian aid and from fleeing to UN refugee camps in South Sudan.

“Now is the time for the US and the international community to deliver a cross-border humanitarian aid operation to break the blockade the regime has created, which threatens the lives of thousands of Nuba civilians.”

Yida camp has been the major receiving point for refugees fleeing the fighting and the approaching famine conditions in South Kordofan. On Jan. 22, the UN Office for the Coordination of Humanitarian Affairs (OCHA) reported that there are 24,000 refugees in the camp.

In a previous report released on Jan. 25, the Satellite Sentinel Project presented evidence and reports, indicating the SAF is apparently preparing to launch a full-scale assault against the rebel-held stronghold in the Kauda Valley of the Nuba Mountains and had restricted access to the road leading toward South Sudan through Buram and Jau. The imagery in the new SSP report provides visual confirmation of a fortified chokepoint likely established along that road sometime after Nov. 23, 2011.

Enough Project Executive Director John C. Bradshaw stated: “The international community must not wait to protect these civilians and cannot claim there was no warning that the government of Sudan was preparing to attack its own people. The evidence in SSP’s two most recent reports shows a pattern almost identical to the government of Sudan’s road-building activity and disposition of forces revealed by satellites in March of last year, before SAF’s May bombardment and invasion of the oil-producing border area of Abyei, which displaced 110,000 of the indigenous Ngok Dinka population.”

SSP has documented newly elevated roads pointing into the Nuba Mountains from SAF-controlled areas and the buildup of forces in positions where they can easily deploy along those roads with heavy armor, artillery and close air support, including helicopter gunships.