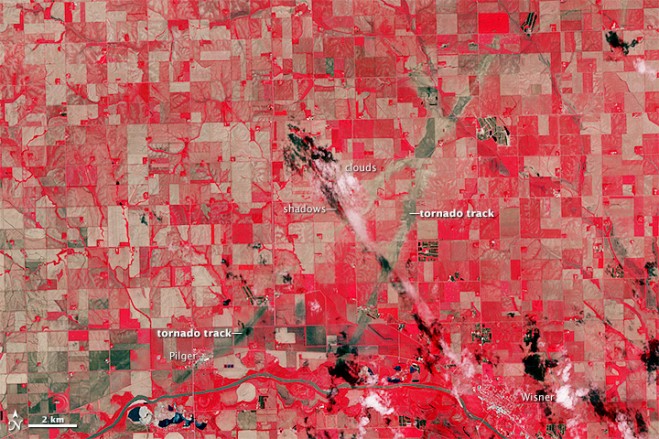 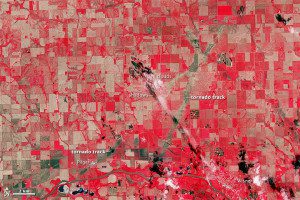 Two EF-4 tornado tracks are visible in this false-color image of northeast Nebraska captured by NASA’s Terra satellite on June 21, 2014. The tracks are tan paths of bare ground across plant-covered fields, which are red. The towns of Pilger and Wisner are bright white.

On June 16, 2014, a tornadic thunderstorm system moved across portions of northeast Nebraska, producing five tornadoes, including rare twins on the ground at the same time.

Four of the tornadoes were rated as EF-4 on the Enhanced Fujita Scale, meaning they were violent tornadoes with winds between 166 and 200 miles per hour. One EF-4 tornado spun directly through Pilger, Neb., a small town of 350 people, leveling much of the town.

In the accompanying image, the two EF4 tornado tracks start at the bottom-middle and traveled northeast where they eventually crossed paths and dissipated (middle top of the image). According to the National Weather Service, the tornado that hit Pilger directly had a path 18.41 miles long. The eastern tornado traveled 11.84 miles.