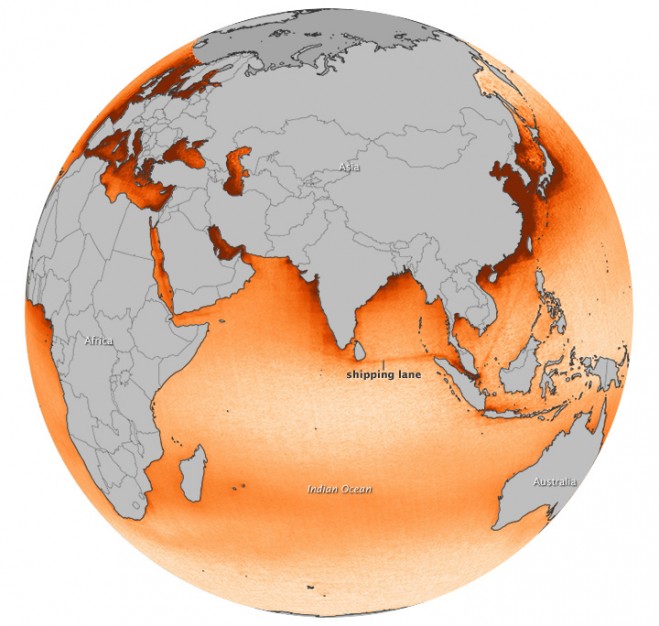 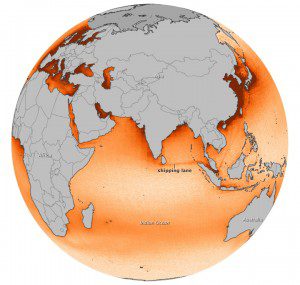 This map is based on OMI measurements acquired between 2005 and 2012. The NO2 signal is most prominent in an Indian Ocean shipping lane between Sri Lanka and Singapore, appearing as a distinct orange line against (lighter) background levels of NO2. Other shipping lanes that run through the Gulf of Aden, the Red Sea and the Mediterranean Sea also show elevated NO2 levels, as do routes from Singapore to points in China.

For more than a decade, scientists have observed “ship tracks” in natural-color satellite imagery. Now they can see that ships also have a more subtle, almost invisible signature.

Data from the Dutch and Finnish-built Ozone Monitoring Instrument (OMI) on NASA’s Aura satellite show long tracks of elevated nitrogen dioxide (NO2) levels along certain shipping routes. NO2 is among a group of highly reactive oxides of nitrogen known as NOx that can lead to the production of fine particles and ozone that damage the human cardiovascular and respiratory systems. Combustion engines, such as those that propel ships and motor vehicles, are a major source of NO2 pollution.