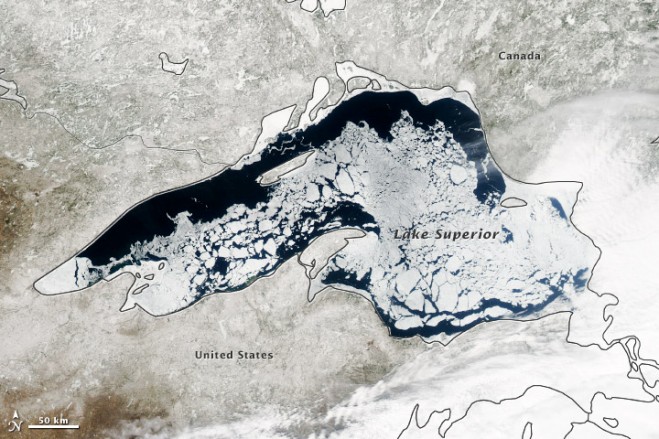 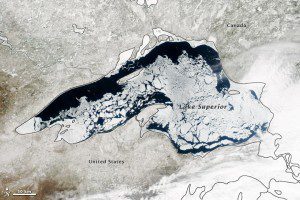 On April 20, 2014, NASA’s Aqua satellite captured this natural-color image of Lake Superior. The lake was 63.5 percent ice covered, according to the NOAA Great Lakes Environmental Research Lab. Averaged across Lake Superior, ice was 22.6 centimeters (8.9 inches) thick; it was as much as twice that thickness in some locations.

Though North America is a full month into astronomical spring, the Great Lakes have been slow to give up on winter. Lake Superior leads the pack, with more than 60 percent of its surface ice covered.

George Leshkevich, a National Oceanic and Atmospheric Administration (NOAA) researcher, affirmed that ice cover this spring is significantly above normal. For comparison, Lake Superior had 3.6 percent ice cover on April 20, 2013; in 2012, ice was completely gone by April 12. In the last winter that ice cover grew so thick on Lake Superior (2009), it reached 93.7 percent on March 2 but was down to 6.7 percent by April 21.

Average water temperatures on all of the Great Lakes have been rising over the past 30 to 40 years, and ice cover generally has been shrinking. (Lake Superior ice was down about 79 percent since the 1970s.) But chilled by persistent polar air masses throughout the 2013-2014 winter, ice cover reached 88.4 percent on Feb. 13, 2014, and 92.2 percent on March 6, 2014, the second highest level in four decades.