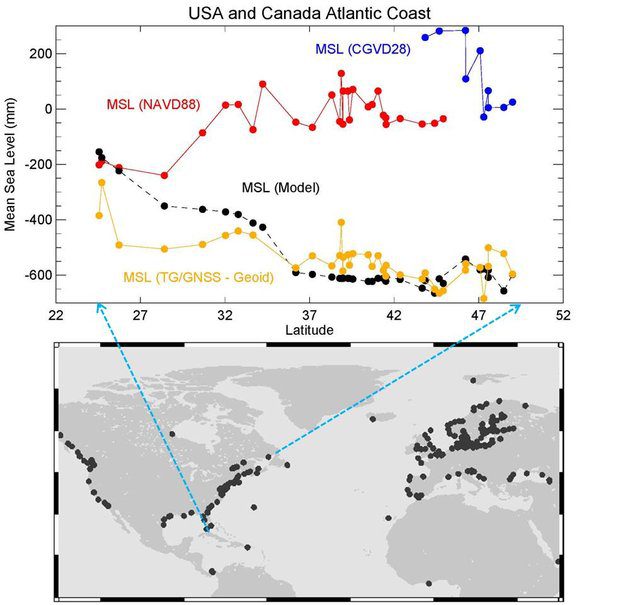 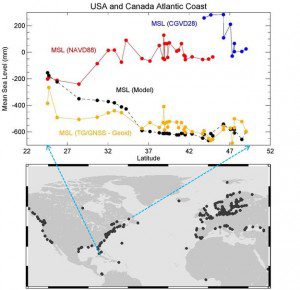 The red and blue dots show values of mean sea level measured with respect to national datums in the United States and Canada (red and blue, respectively). The data indicate that the height of the sea increases traveling north from Florida to Canada. Most modern numerical models of ocean circulation (black dots) suggest that the slope of the sea should actually decrease travelling north and can be explained by the effects of the Gulf Stream in this region of the Atlantic Ocean. The new geoid from the GOCE gravity mission has resolved this long-debated mystery by providing conclusive proof that the height of the sea does, indeed, drop (yellow dots).

For decades, scientists have disagreed about whether the sea is higher or lower heading north along the east coast of North America. What’s the answer?

Thanks to precision gravity data from the European Space Agency’s GOCE satellite, this controversial issue now has been settled—it’s lower. Many might assume that the height of the sea is the same everywhere, but this isn’t true because winds, currents, tides and different temperatures cause seawater to pile up in some regions and dip in others.

It’s difficult, however, to determine relative heights of the sea, especially near the coast. To do this, tide gauge measurements need to be compared with a “level” surface. The old method of making these calculations involved conventional leveling, carrying surveying instruments thousands of kilometers and combining measurements in the national surveying datums that were assumed to be level reference surfaces.

GOCE maps variations in Earth’s gravity with extreme detail. The result is a unique model of the “geoid,” which is essentially a virtual surface where water doesn’t flow from one point to another. The new geoid and in situ gravity measurements have been used as a reference to establish leveling heights. Combining the GOCE geoid and Global Positioning System heights at tide gauges provides indirect ways to calculate sea heights by leveling along coastlines.