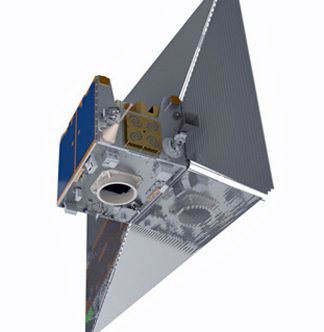 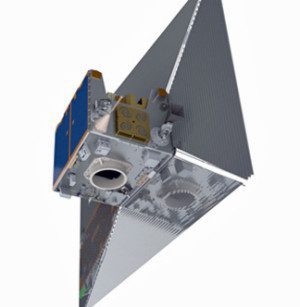 An artistic rendition of TechDemoSat-1 shows the satellite with its sail extended.

At the end of its mission, the descent of Surrey Satellite Technology Ltd.’s TechDemoSat-1 satellite will be assisted by a specialized de-orbit sail just one-thousandth of an inch thick.

Space debris is becoming an increasingly worrying problem for the space industry—many space-faring nations are taking seriously their responsibility for the stewardship of the space environment and are implementing measures that follow the guidelines of the United Nations’ Committee on the Peaceful Uses of Outer Space (COPUOS).

In the United States, NASA adopted a policy to control the generation of orbital debris. Satellite operators are considering various methods, such as de-orbit sails and tethers, as a way to bring inactive low-Earth-orbit satellites into lower orbits for eventual burn-up in Earth’s atmosphere. Surrey Satellite Technology Ltd.’s science and technology demonstration mission TechDemoSat-1, scheduled for launch this month, will support the COPUOS objectives.

The TechDemoSat-1 mission gave the Cranfield team the unique technology demonstration opportunity to take on the challenge of evolving its ideas from designs on paper to flight-ready hardware. Maintaining a low mass and low volume is always a challenge with space projects; the TechDemoSat-1 de-orbit sail is made from a material called Kapton, which is just one-thousandth of an inch, or 25 microns, thick.