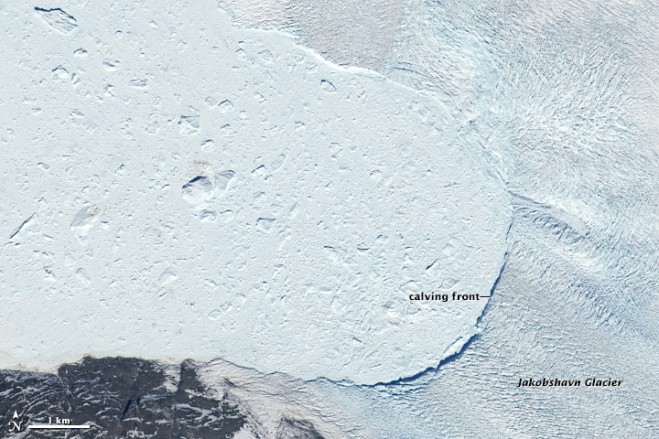 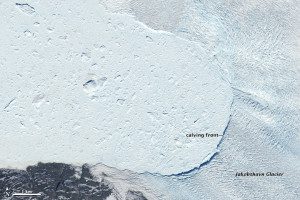 Sometime between May 9 and June 1, when the Landsat 8 satellite acquired this image, Greenland’s Jakobshavn Isbrae glacier shed kilometers of ice from its front.

Among the world’s most dynamic glaciers is Greenland’s Jakobshavn Isbrae, which showed its active nature with a large calving event at the end of May 2014.

Though large and dramatic, this event isn’t unusual for Jakobshavn or other glaciers, which accumulate snow during the winter and shed ice by calving. Greenland’s many glaciers drain ice from the central ice sheet; but even in a land of glaciers, Jakobshavn is prolific.

Since 2000, Greenland has lost some 739 gigatons of ice, and approximately 30 percent of that loss came from Jakobshavn and four other glaciers. That loss, along with surface melting, has caused Greenland’s ice sheet to start losing more ice than it gains. Jakobshavn has contributed one millimeter to sea-level rise between 2000 and 2011 from such calving events.

Read the full story and use NASA’s image-comparison tool to get a sense of how much ice broke away from Greenland’s Jakobshavn Isbrae glacier.