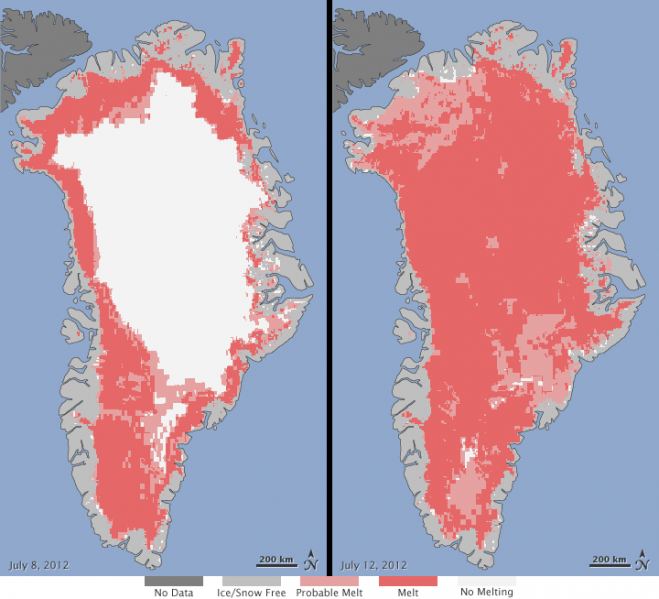 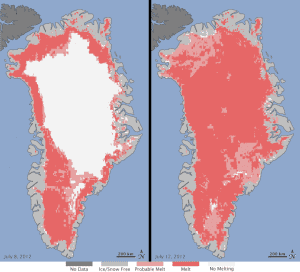 Nearly the entire ice sheet covering Greenland—from its thin coastal edges to its two-mile-thick center—experienced some degree of melting for several days in July 2012.

According to measurements from three satellites and an analysis by NASA and university scientists, an estimated 97 percent of the top layer of the ice sheet had thawed at some point in mid-July, the largest extent of surface melting observed in three decades of satellite observations.

The data visualization maps are based on observations from the Special Sensor Microwave Imager/Sounder (SSMI/S) on the U.S. Air Force’s DMSP satellite, from India’s OceanSat-2 and from NASA’s Terra and Aqua satellites. The satellites measure different physical properties at different scales, and they pass over Greenland at different times. Taken together, they provide a picture of an extreme melt event.

On July 8, satellites showed that about 40 percent of the ice sheet had undergone thawing at or near the surface. By July 12, the extent of melting spread dramatically beyond the norm. In the accompanying images, areas classified as “probable melt” (light pink) correspond to sites where at least one satellite detected surface melting. Areas classified as “melt” (dark pink) correspond to sites where two or three satellites detected melting.