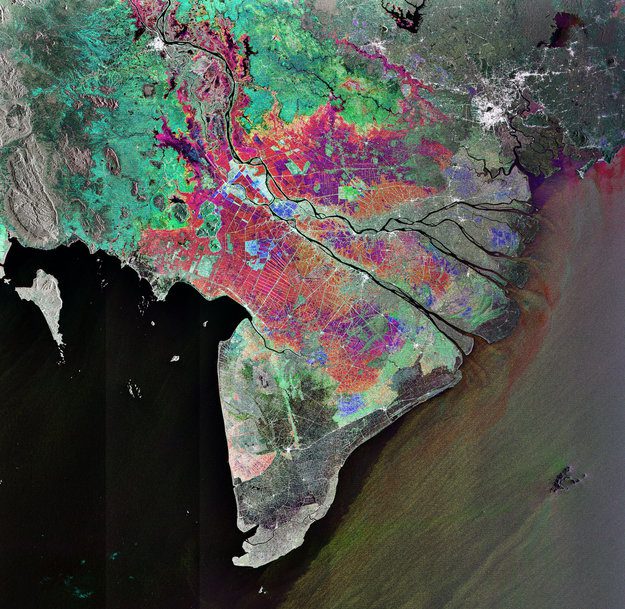 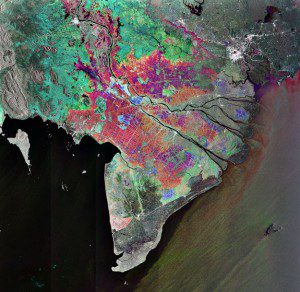 From illegal logging in Africa to the impact of rising seawater on rice production in Vietnam, Earth observation satellites are addressing diverse global agricultural challenges.

From 800 km in space, Earth observation satellites are assisting international development organizations with their work in developing countries. Satellites enable objective observations of the status of remote rural areas consistently over space and time.

The Mekong Delta in Vietnam is one of the world’s richest agricultural regions. Because of the amount of rice produced there it’s often referred to as Vietnam’s “rice bowl.” The crop feeds the rest of the country and produces enough to make Vietnam one of the world’s top rice exporters.

But the local agriculture—and, as a consequence, the nation’s economy—is threatened by sea level rise and the subsequent influx of salt water. To identify long-term changes in rice-cultivated areas and evaluate the effect of salinity intrusion on these areas, satellite data are being used to create land use and land cover maps for statistical analysis.

This is one of several service trials within a collaborative project by the European Space Agency (ESA) and the United Nations (UN) International Fund for Agricultural Development (IFAD), which finances agricultural development projects primarily for food production in the developing countries. Other ESA–IFAD projects include land use, land cover and crop monitoring in Niger, Gambia, Botswana, São Tomé and Príncipe.