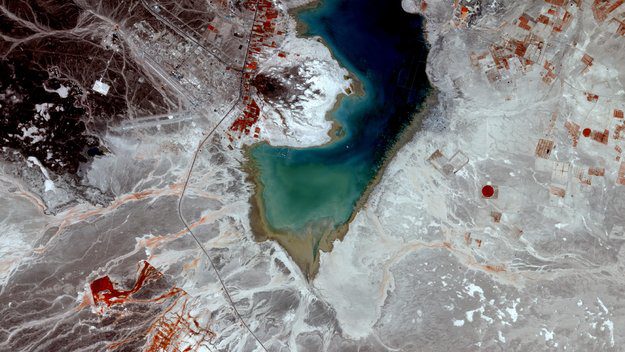 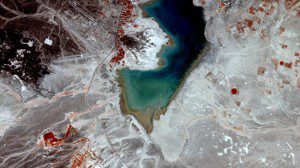 Through GlobWetland II, about 200 different wetlands have been monitored in 10 countries of the Southern Mediterranean Basin. While many—such as Jordan’s Azraq wetland, shown in this April 10, 2010, RapidEye satellite image—suffered from climate change, population growth or economic development, others remained stable or even increased in size.

Following promising results from Earth observation efforts in the Mediterranean, the European Space Agency (ESA) is working with African partners to expand its GlobWetland project even further.

In the heart of Jordan’s eastern desert, an oasis of marshland and natural water collection makes up the Azraq wetland. The Ramsar Convention, an intergovernmental treaty for sustainable wetlands use, recognized the wetland and adjacent mudflat in 1977 as an important station for migratory birds. Over the years, the extraction of water for drinking and irrigation significantly reduced the Azraq’s ground water levels. Between 1975 and 2005, the wetland area diminished by about 23 square kilometers while irrigated areas increased by almost 14 square kilometers, as observed through ESA’s GlobWetland II project.

The project helps Mediterranean countries map and monitor wetland areas by exploiting satellite data. Wetlands are integral components in the hydrological cycle and contain most of the water used to meet human needs. The wise use of wetlands is essential for delivering sustainable water management, which also promotes sustainable economic and social development.

Image courtesy of RapidEye and ESA.