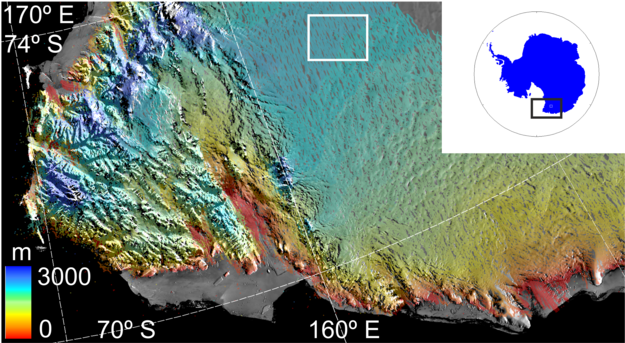 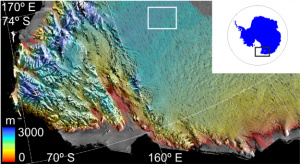 Shown within the white box is the location of the crater in Victoria Land, East Antarctica, at about 73ºS and 156ºE. The color scale shows height derived from CryoSat data.

The European Space Agency’s CryoSat satellite has found a vast crater in Antarctica’s icy surface that may have been left behind when a lake lying under about 3 kilometers of ice suddenly drained.

Far below the thick ice sheet that covers Antarctica, there are lakes of fresh water without a direct connection to the ocean. These lakes are of great interest to scientists who are trying to understand water transport and ice dynamics beneath the frozen Antarctic surface—but this information isn’t easy to obtain.

One method is to drill holes through kilometers of ice to the water—a difficult endeavor in the harsh conditions of the polar regions. But instead of looking down toward the ice, a team of European scientists is looking to the sky to improve our understanding of subglacial water and its transport.

By combining new measurements acquired by CryoSat with older data from NASA’s ICESat satellite, the team has mapped the large crater left behind by a lake and even determined the scale of the flood that formed it.