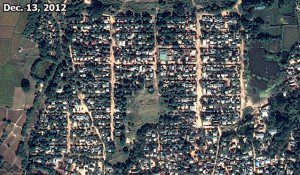 Human Rights Watch estimates that 442 residential buildings were destroyed or severely damaged in the area of Meiktila. This before image of the area was acquired on Dec. 13, 2012.

An estimated 40 people were killed and 61 wounded in the clashes between Muslims and majority Buddhists in Meiktila in the Mandalay Region. Satellite images analyzed by Human Rights Watch show the scale of the destruction: an estimated 828 buildings, the vast majority residences, were totally destroyed, and at least 35 other buildings were partially destroyed. 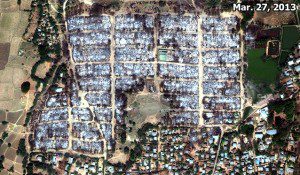 This image, acquired on March 27, 2013, shows wide-scale damage and destruction.

Areas with near total destruction were concentrated within three locations in Meiktila measuring more than 24 hectares in total area west and northeast of the city's main market. The destruction appears similar to satellite imagery of towns affected by sectarian violence in Arakan State in 2012 in which arson attacks left large, clearly defined residential areas in ashes.