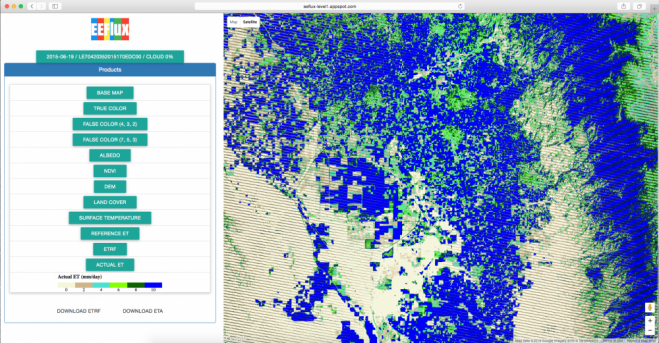 Using infrared imagery captured by Landsat satellites and publicly available on the Internet through Google Earth Engine, EEFlux can quickly create maps of evapotranspiration, a way to measure how much water is being used. In this map of an agricultural region in California, dark blue and dark green represent higher levels of evapotranspiration, while light brown represents low levels.

Earth may be the “Blue Planet,” with more than 70 percent of its surface covered in water, but it is still a thirsty planet, with freshwater in heavy demand. The most significant draw on the water supply is crop irrigation, accounting by some measures for nearly two-thirds of U.S. surface-freshwater withdrawals.

It’s not easy to track how much water gets used—and making sure it gets used efficiently and legally, where and when it’s needed—across millions of acres of cropland. But researchers armed with data from the Landsat Earth-observing satellites recently teamed with Google to make it easier. These researchers from the University of Idaho, University of Nebraska and the Desert Research Institute are using satellite images to map evapotranspiration—water evaporating from the ground or transpiring from the plants.

Evapotranspiration levels are a way to estimate how much water the plants are using. Some of the water vapor comes directly from the soil, but much of it passes through the plant first. “That’s a necessary process,” explained University of Idaho water resources engineering professor Richard Allen, “because it’s that flow of water from the soil that transports the nutrients the plant needs.”

NASA launched the first Landsat satellite in July 1972 and, under U.S. Geological Survey (USGS) management, the program has been providing continuous images of Earth’s surface ever since. The latest iteration, Landsat 8, was sent into orbit in February 2013 and produces high-resolution images of the entire planet every 16 days. With the help of Landsat 7, which is still in operation, full coverage is available every eight days. Both satellites carry a thermal imager that captures images in the infrared band, which shows warmer and cooler spots across Earth’s surface.