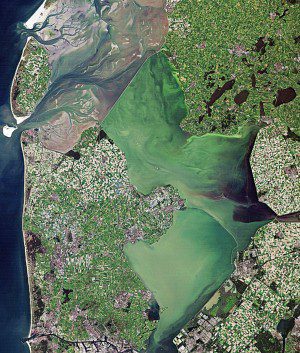 This Landsat image from Sept. 6, 2010, shows a small part of the intertidal Wadden Sea and two shallow, artificial lakes in the Netherlands. Visible in the image is the Afsluitdijk, a causeway that creates a division between the Wadden Sea to the north and the former Zuiderzee bay to the south. After the dike was built, the Dutch were able to reclaim land from the sea; the lighter colored areas in the lower-central part of the image are agricultural land plots.

Cut off from the Wadden Sea by a causeway, the shallow IJsselmeer Lake is lined by dikes that protect the surrounding land from rising water levels. In a recently completed Terrafirma study, the IJsselmeer dikes were checked using Envisat radar data from 2003“2010. Results show that a large stretch of the dike near the town of Medemblik is subsiding up to 5 mm per year.

These numbers are normal for dikes with recent reconstruction works. Other areas also show some subsidence, but overall the dikes appear stable. The study was just the first step in a project that combines satellite data, information on subsurface structure and the knowledge of dike managers for the early detection of weak spots in dikes. Dike management authorities Wetterskip FryslÃ¢n and Hoogheemraadschap Hollands Noorderkwartier are enthusiastic about the first results generated by the project.

For us, the benefit of satellite monitoring is that it tracks down small anomalies that we can't see with the naked eye, said FryslÃ¢n Water Authority Manager Harry Boon. This is a highly promising approach and a valuable addition to our usual physical inspections.

The European Space Agency supports the Landsat series as a Third-Party Mission, meaning it uses its ground infrastructure and expertise to acquire, process and distribute Landsat data to users.