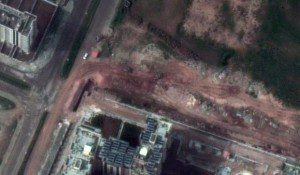 This satellite image, acquired by DigitalGlobe's WorldView-2 satellite, shows tanks in the Syrian city of Homs.

Cloud cover over Syria in recent days has left few opportunities for satellite photography, and the images are hazy because of moisture in the atmosphere, Wood said. The images were taken the same day two suicide bombers attacked security compounds in the Syrian city of Aleppo, killing 28 people, according to Syrian government officials.

Troops and security forces fired on anti-regime protesters as they left mosques after prayers nationwide. The Syrian government has been trying to suppress an 11-month-old uprising. Wood says the photos were taken by DigitalGlobe's WorldView-2 satellite from about 480 miles above Earth.