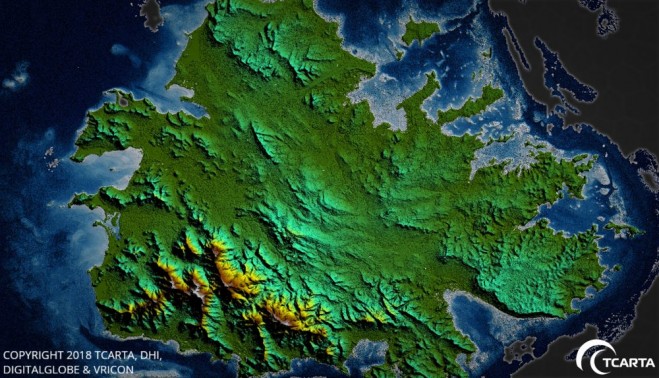 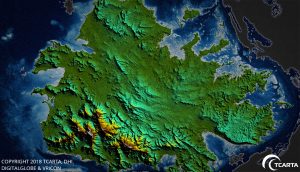 A seamless land and shallow-water terrain model of the island of Antigua was derived from high-resolution satellite imagery. (Credit: DigitalGlobe)

TCarta delivered pre- and post-disaster surface models for the Caribbean islands of Antigua and Barbuda for use in Hurricane Irma recovery efforts. The satellite-derived surface models contain seamless datasets of onshore elevation and offshore water depth measurements for each island.

“By specifying satellite-derived data as the deliverable in its tender, the U.K. government acknowledged the speed and cost advantages this technology offers compared with traditional ship-borne surveying or airborne LiDAR collection,” said TCarta CEO David Critchley.

Hurricane Irma devastated the Caribbean in September 2017. The governments of Antigua and Barbuda requested accurate data for onshore land elevations and offshore water depths from before and after the storm hit. The datasets will be used in digital change detection analyses to determine how Irma altered the surfaces of the land and seafloor. This will be vital information in repairing onshore drainage systems and updating coastal navigation charts.