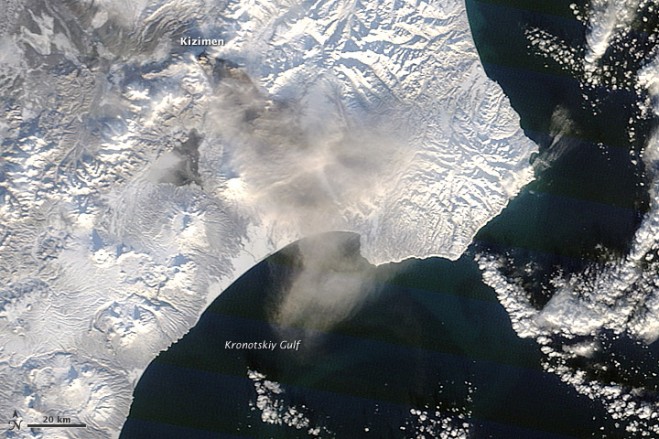 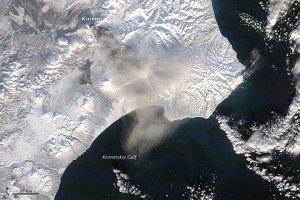 The MODIS instruments on NASA’s Terra and Aqua satellites captured these natural-color images on Dec. 14, 2011. Terra passed over far eastern Russia first to acquire this image.

Seismic activity and thermal anomalies increased near the Kizimen volcano in early December, culminating in a fresh eruption starting on Dec. 13. Kizimen has been erupting sporadically since 2009. 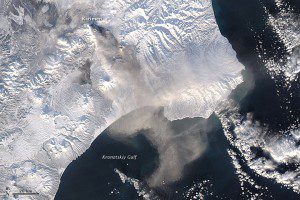 NASA’s Aqua satellite passed over the volcano about two hours after Terra, affording a view of the ash plume’s path as it blew to the south and east.

The Moderate Resolution Imaging Spectroradiometer (MODIS) instruments on NASA’s Terra and Aqua satellites captured these natural-color images onDec. 14, 2011. Terra passed over far eastern Russia first, at 11:05 a.m. local time, with Aqua following one hour and 50 minutes later. The time difference afforded a view of the movement of the ash plume as it blew to the south and east.

Observers with the Kamchatkan Volcanic Eruption Response Team detected lava flows and pyroclastic flows (hot avalanches of rock, ash and water debris) on the eastern and northeastern flanks. According to scientists at the Russian Academy of Sciences, air temperatures were 32 degrees Centigrade near the summit, while air temperatures in the surrounding region were –26 degrees.

Itar-Tass reported potential disruptions to air traffic in the northwest Pacific, particularly for low-flying planes, as aviators were put on the highest (red) alert for ash and debris. The small abrasive particles in volcanic ash can get lodged in jet engines, causing engine failures. There was no threat, however, to local populations on the ground because of the remote location of Kizimen.