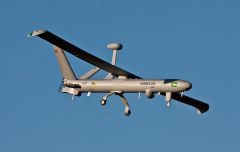 Three VANTS, or unmanned aircraft systems, are on test surveillance in areas surrounding Rio do Janeiro.

A battalion of Special Forces from Rio do Janeiro is using drones to monitor the estimated 600 “favelas,” or shanty towns, in the hills surrounding the city’s world-famous beaches.

The VANTS—Portuguese for unmanned aircraft system (UAS)—were manufactured by the Brazilian Military Engineering Institute with Israeli technology and are being flown on an experimental basis.

So far three VANTS are on test surveillance and in the near future could be used for several tasks, including monitoring and support operations in many of the favelas, which remain under control or threat from drug-related gang members who hide among the impoverished residents, according to Montenegro Magalhaes Neto from the Military Engineering Institute.