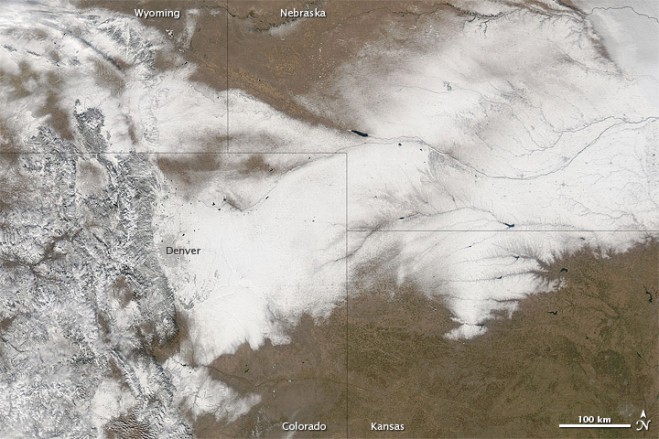 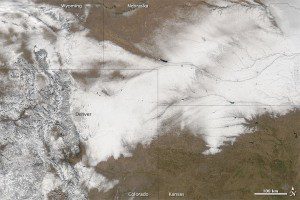 Colorado’s recent snowfall didn’t break all-time state records, but it did break records for the month of February.

After moving out of northeastern Colorado, the storm left heavy snow across Nebraska. The Moderate Resolution Imaging Spectroradiometer (MODIS) sensor on NASA’s Aqua satellite captured this natural-color image on Feb. 5, after skies had largely cleared over the region. Snow and mountain peaks create a mottled appearance in western Colorado. Elsewhere, the snow cover forms a wide, uneven track over Wyoming, Kansas and Nebraska.

The snowfall didn’t break all-time records in Colorado, but it did break records for the month of February. The storm deposited 15.9 inches (40.4 centimeters) in Denver and 22.7 inches (57.7 centimeters) in Boulder. The National Weather Service (NWS) also reported up to 18 inches (46 centimeters) of snow west of Omaha, Neb.

NWSmeteorologists explained that northeastern Colorado generally experiences storms of this magnitude in March or April. This February storm showed some of the same characteristics of powerful spring storms, as a weather front from the Pacific Northwest converged with moisture from the Gulf of Mexico.

Colorado ski resorts welcomed the precipitation after suffering from below-normal snow cover for most of the 2011–2012 ski season. But the new snow raised the risk of avalanches. On Feb. 6, the Colorado Avalanche Information Center reported “considerable” avalanche danger across much of the state.