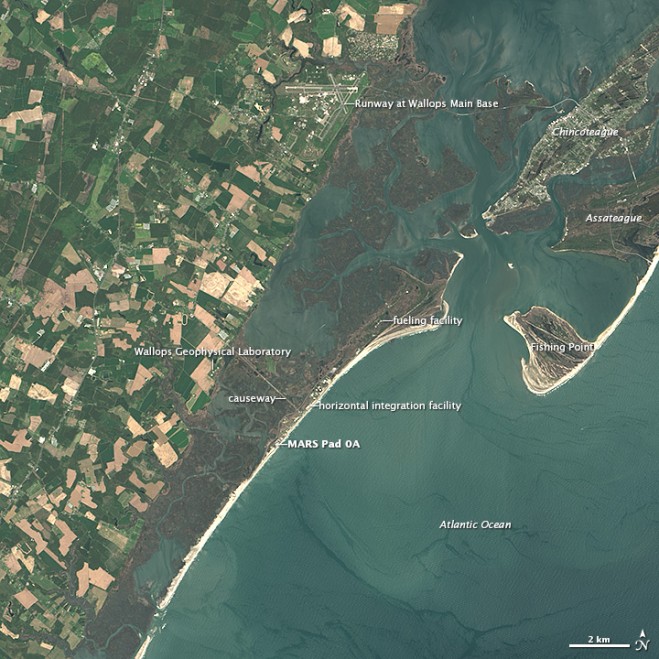 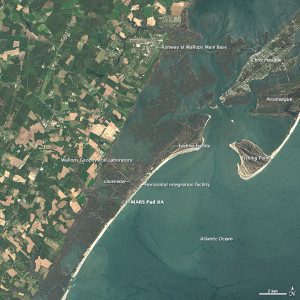 Landsat 8 captured this image of Wallops Island and the surrounding area on May 3, 2014. A variety of launch-related infrastructure is visible along the coast, including rocket storage and assembly buildings, launch pads and protective sea walls. A causeway and bridge connect the island with the Delmarva Peninsula.

Where wild ponies once roamed the marshes and beaches, today Wallops Island is the site of a thriving spaceport that launches several commercial and government rockets each year.

Wallops has a long history with rockets. On July 4, 1945, NASA’s predecessor—the National Advisory Committee for Aeronautics (NACA)—launched the first rocket from Wallops, making the island one of the oldest launch sites in the world.

Since then, more than 14,000 rockets have lifted off. While most involved modestly sized meteorological and sounding rockets, the completion of launch pad 0A at the Mid-Atlantic Regional Spaceport (MARS) in 2011 has made it possible to launch larger and more powerful rockets.