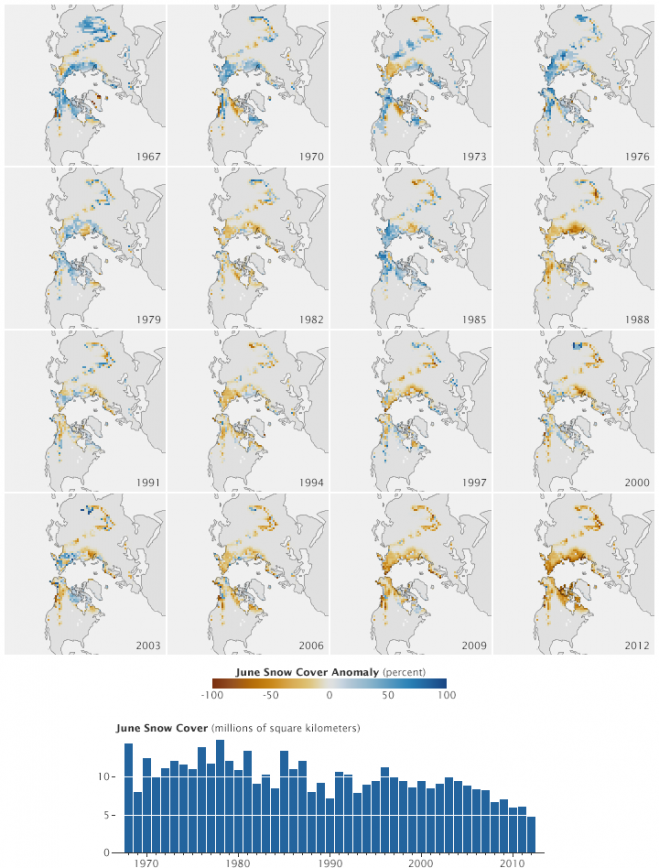 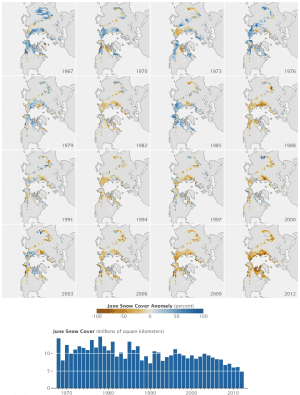 Research shows between 1979 and 2012, June snow cover extent decreased by 17.6 percent per decade compared with the 1979–2000 average, allowing Earth to absorb more of the sun’s heat.

In the high latitudes of the Northern Hemisphere, snow typically covers the land surface for nine months each year. The snow serves as a reservoir of water and a reflector of the sun’s energy, but recent decades have witnessed significant changes in snow cover extent.

The snow-cover study authors, Chris Derksen and Ross Brown, found an overall decline in snow cover from 1967 through 2012 and also detected an acceleration of snow loss after the year 2003. Between June 2008 and June 2012, North America experienced three record-low snow cover extents. In Eurasia, each successive June from 2008 to 2012 set a new record for the lowest snow cover extent yet recorded for that month.

Previous research identified a link between rising air temperatures and shrinking snow cover, so Derksen and Brown weren’t surprised to see an overall loss of snow.

“But we were surprised at the continued broken records of June Arctic snow cover extent over the past five years,” says Brown. “Arctic spring snow cover typically fluctuates over cycles of about three to four years, so you don’t expect to see sequences of decreasing snow cover persisting through these natural cycles.”

As with sea ice, declining snow cover extent means decreasing albedo. The overall “whiteness” of an object determines how much sunlight it reflects back into space. Snow has high albedo, reflecting up to 90 percent of the sunlight it receives. As snow cover declines, dark soils and vegetation absorb more of the sun’s energy.

The Geophysical Research Letters study pointed out that declining snow cover raises ground temperatures and increases the thickness of the active layer—the uppermost layer of permafrost that thaws each summer. When organic material in thawing permafrost decomposes, it can release methane, a potent greenhouse gas when released to the atmosphere.