September 5, 2014
Recalling Hell with the Lid Off 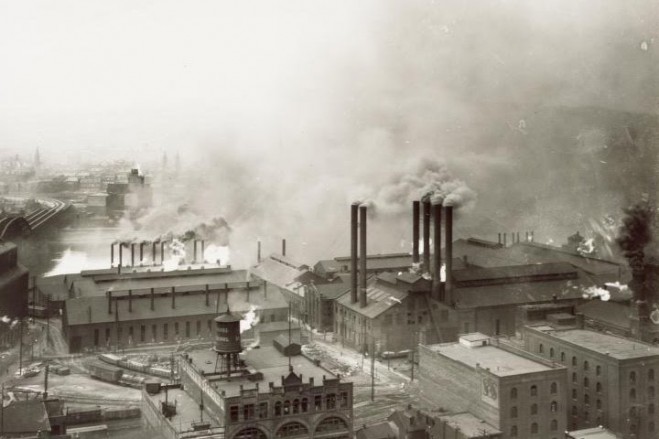 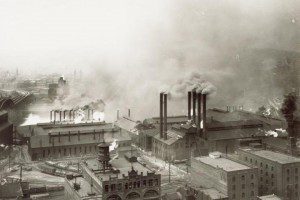 This 1906 photo shows Pittsburgh’s Strip District neighborhood looking northwest from the roof of Union Station. The Fort Wayne Railroad Bridge, spanning the Allegheny River, is partly visible on the left.

During the first half of the 20th century, coal-burning power plants, factories and homes produced pollution that likely exceeded modern Beijing, one of the world’s most polluted cities. 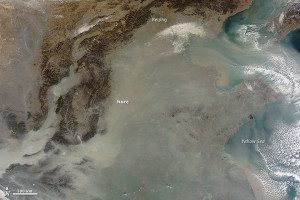 This natural-color satellite image captured by NASA’s Terra satellite offers both a modern and historical context. It shows heavy pollution heading toward Beijing on Dec. 12, 2013. If satellites had been flying during the first half of the 20th century, it’s reasonable to assume that skies over the eastern United States or Europe would have looked something like this on some days.

The problem was especially bad in Pittsburgh. The hills surrounding the city were filled with bitumen, a type of soft coal that released large quantities of sulfate-producing gases, soot and other pollutants when burned. In 1866, an Atlantic Monthly writer visited Pittsburgh and reported, “The town lies low, as at the bottom of an excavation, just visible through the mingled smoke and mist, and every object in it is black. Smoke, smoke, smoke—everywhere smoke.” It was, he wrote, “like looking over into hell with the lid taken off.”

In October 1948, a disastrous outbreak of air pollution occurred in nearby Donora, Pa. What meteorologists call a temperature inversion—warmer air moving above cooler air—triggered the crisis. The warm air functioned like a lid, trapping fumes from steel and zinc smelters and exposing the town’s 13,000 residents to high levels of sulfate pollution.

The inversion lasted just four days, but the health consequences were swift: 20 people died and 6,000 suffered serious respiratory problems. Something similar happened in London in December 1952, leading to thousands of respiratory problems and premature deaths.

Photograph courtesy of the University of Pittsburgh Smoke Control Lantern Slide Collection and the Carnegie Museum of Art.