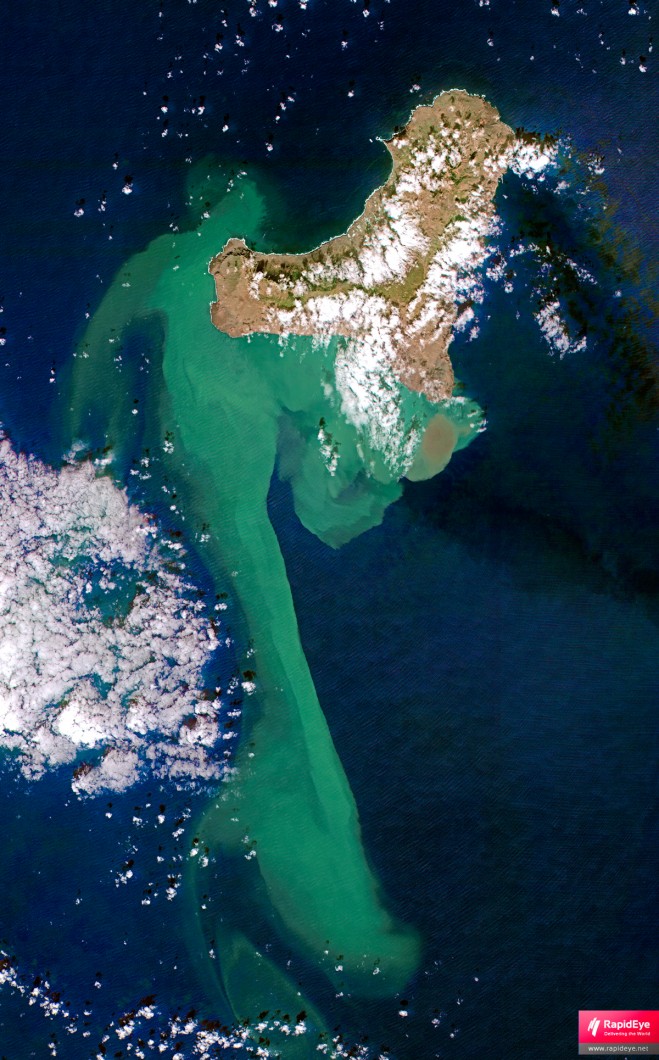 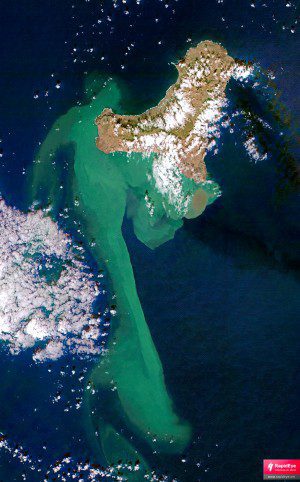 A RapidEye true-color satellite image features a gigantic stain visible on the surface of Las Calmas Sea, resulting from a submarine eruption out of the coast of El Hierro, Spain.

The island off the Atlantic coast of North Africa—built mostly from a shield volcano—has been rocked by thousands of tremors and earthquakes since July 2011, and an underwater volcanic eruption 1,200 meters below sea level started onOct. 10, 2011. The eruption is the first in the island chain in nearly 40 years.

A milky green plume in the water stretches 25-30 kilometers at its widest and perhaps 100 kilometers long, from a large mass near the coast to thin tendrils as it spreads to the southwest. The plume is likely a mix of volcanic gases and a blend of crushed pumice and seafloor rock.

Tremors were reported for the past several months from seismic stations on El Hierro, particularly in the northwest of the island. Then on Oct. 12, 2011, the strength of the tremors significantly decreased while foaming, rock-strewn plumes appeared in the sea to the south of the island. The underwater plume of volcanic debris has persisted for nearly two weeks and has been mixed and dispersed by ocean surface currents. The eruption is occurring in water that is tens to a few hundred meters deep.

Geologist and blogger Erik Klemetti offered this analysis: “It looks like the main fissure might be 2-3 kilometers in length and is close to on strike with the rift axis for the main El Hierro edifice. Ramon Ortiz, coordinator of a government scientific team, said that if/when the eruption reaches shallower water, we should expect to see the surface water start to steam, followed by explosions of steam and magma and finally the emergence of an island.”