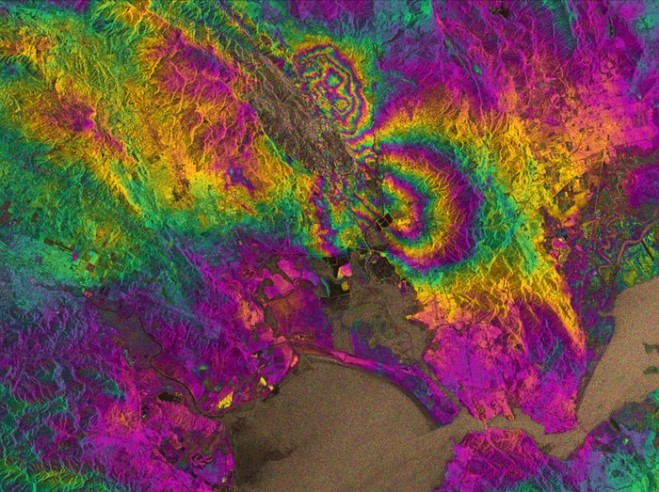 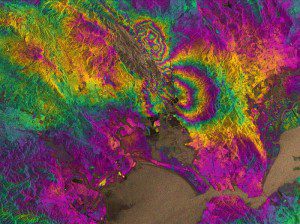 The two round shapes around Napa Valley, which are visible in the central part of this interferogram computed with Sentinel-1A images, show how the ground moved during the quake. Deformation on the ground causes phase changes in radar signals that appear as the rainbow-colored patterns. Each color cycle corresponds to a deformation of 28 mm deformation. The maximum deformation is more than 10 cm, and an area of about 30 x 30 km was affected significantly.

Radar images from the European Space Agency’s newly launched Sentinel-1A satellite have been used to map the rupture caused by the largest earthquake to shake northern California in 25 years.

Scientists collaborating through the U.K. Natural Environment Research Council’s Centre for the Observation and Modeling of Earthquakes, Volcanoes and Tectonics (COMET) used Sentinel-1A’s special capabilities to analyze the quake. Synthetic aperture radar interferometry is a technique where two or more satellite radar images of the same area are combined to detect large-scale surface changes. Small changes on the ground modify the reflected radar signal and lead to rainbow-colored fringes in the interferogram.

Yngvar Larsen from Norway’s Northern Research Institute and Petar Marinkovic from PPO.labs in the Netherlands processed the accompanying interferogram from two images: one that Sentinel-1A acquired on Aug. 7, 2014, the day the satellite reached its operational orbit, and another captured on Aug. 31, 2014.

The image clearly confirms that part of the West Napa Fault system was responsible for the 6.0 earthquake that rocked California’s wine-producing region. However, the fault hadn’t been identified as being particularly hazardous prior to the quake that hit on Aug. 24, 2014.