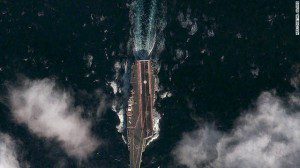 The Chinese aircraft carrier Varyag was spotted on a shakedown cruise by DigitalGlobe's QuickBird satellite.

DigitalGlobe and many others around the world have been interested and watching the China's first aircraft carrier during its nearly decade-long refurbishment. Knowing the strategic significance of the ship, the company knew that people around the world would be interested in seeing this historic image of the Varyag under way.

Originally built in a Ukrainian shipyard as a member of the Project 1143.5 class named Varyag, the carrier was purchased as a derelict hulk in 1998 for about $20 million. The carrier is named in honor of the Qing Dynasty admiral who conquered what is now known as Taiwan in 1681.

The QuickBird image reflects the diverse tasks DigitalGlobe Analysis Center have tackled throughout 2011 by monitoring key issues around the world that matter to people on a global scale, e.g., events associated in Egypt, Yemen, Syria and many other countries in the Middle East; the aftermath of the Japanese tsunami; dramatic flooding in the Midwest; fires in the Southwest and numerous other notable events.