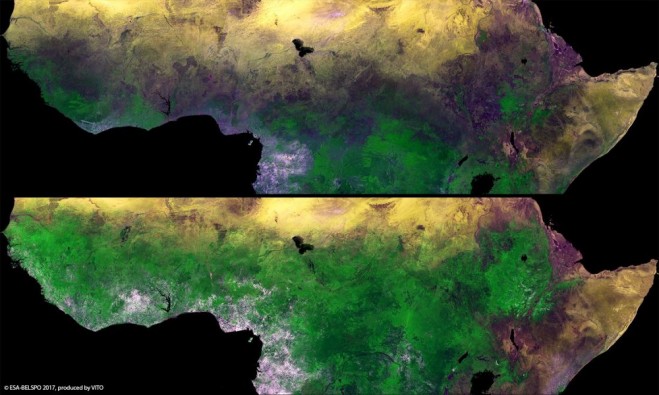 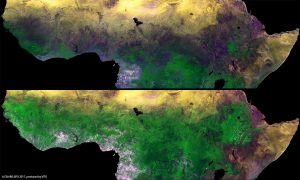 The Proba-V minisatellite recorded the seasonal changes in Africa’s sub-Saharan Sahel, with the rainy season allowing vegetation to blossom between February (top) and September (bottom). (Credit: ESA/Belspo – produced by VITO)

The few months of the rainy season in the Sahel are much needed in these hot and sunny parts of Africa, and are critical for the food security and livelihood of their inhabitants. The name Sahel can be translated from Arabic as coast or shore, considered as the ever-shifting landward “coastline” of the arid Sahara Desert.

Smaller than a cubic meter, Proba-V images the entire land surface of Earth every two days or less, allowing researchers to trace gradual shifts in vegetation. Its main camera’s 2,250-kilometer-swath width collects light in blue, red, near-infrared and mid-infrared wavebands at 300-meter resolution and down to 100-meter resolution in its central field of view.