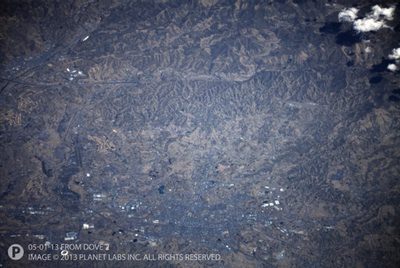 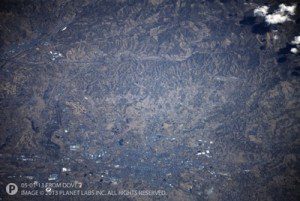 This image was acquired by Planet Labs’ Dove-1 satellite. The company plans to launch 28 similar satellites early next year to provide such images with frequent, global coverage for commercial and humanitarian applications.

Planet Labs, a San Francisco-based space and analytics company, says its 28-satellite constellation will offer frequent, low-cost images of any point on the globe. With these nanosatellites, the company says it will be possible to take high-resolution graphic information quickly and at low cost, which can be used to address various environmental and humanitarian concerns.

“We are motivated to make information about the changing planet available to all people, especially the people who need it the most,” said Robbie Schingler, co-founder of Planet Labs. “The imagery could be used by anyone who cares about changes in land use over time.”

Planet Labs was founded in 2010 to provide universal access to information about the changing planet. Formerly known as Cosmogia, Planet Labs raised $13 million in funding from DFJ, Capricorn, OATV, Founders Fund Angel, Innovation Endeavors, Data Collective and First Round Capital. The company will use the funding to launch the constellation.

Named Flock-1, the nanosatellites have been designed to provide imagery with a resolution of 3 to 5 meters. The constellation is scheduled to fly on the first of eight Orbital Sciences Corp. cargo transportation flights to the International Space Station as part of NASA’s Commercial Resupply Services program.