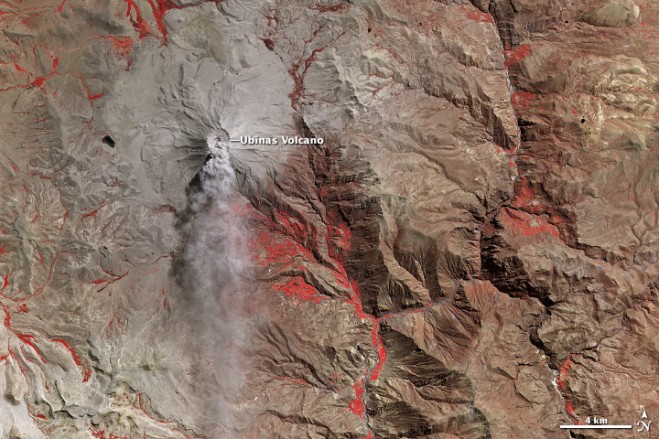 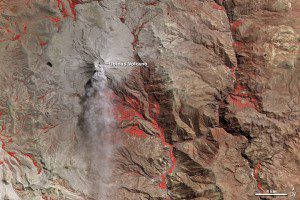 An ash plume explodes into the atmosphere in this false-color image of Peru’s Ubinas Volcano acquired by NASA’s Terra satellite on April 28. Sparse vegetation surrounding the volcano appears red in color.

NASA’s Advanced Spaceborne Thermal Emission and Reflection Radiometer collected a false-color view of Peru’s most active volcano as it erupts another ash plume on April 28, 2014.

Located in the Andes, Ubinas is considered the most active volcano in Peru, with intermittent small to moderate eruptions recorded since 1550. It has been showing signs of an impending eruption since mid-2013, highlighted by the appearance of a fresh lava dome in March 2014.

Explosive activity began in mid-April, sending an ash cloud at least 4,000 meters (13,000 feet) into the air. Smaller explosions persisted through the end of April. The recent eruption led Peruvian officials to declare a state of emergency and to evacuate thousands of people and livestock, mostly llamas and alpacas. Ubinas’ frequent ash emissions are irritating the eyes and throats of thousands of local residents, especially children, according to El Economista.