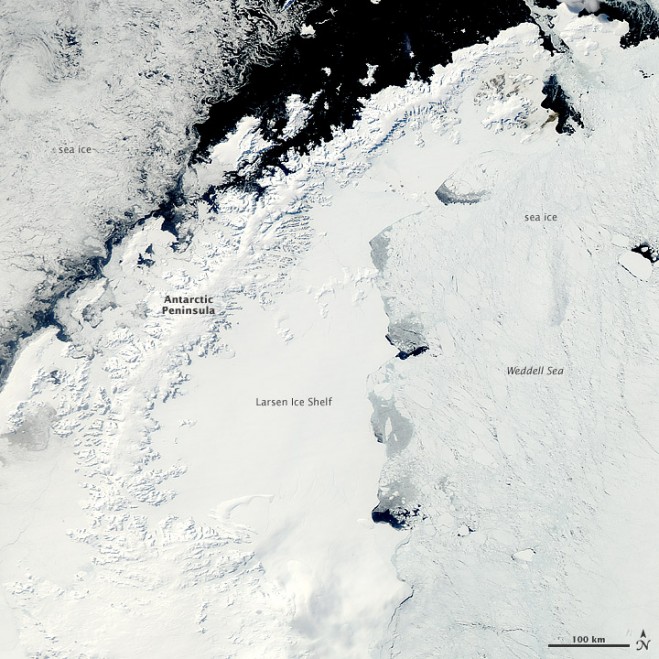 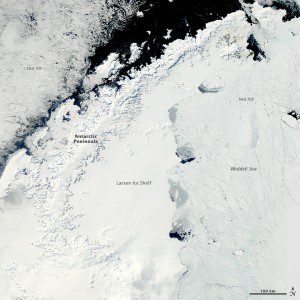 Ninety-eight percent of Antarctica is covered in ice.

As part of the NASA-funded IceBridge mission, planes carry instruments to measure the thickness of snow and ice, as well as the shape of the land and seafloor beneath the ice.

On Oct. 5, 2011, the Moderate Resolution Imaging Spectroradiometer (MODIS) sensor on NASA’s Aqua satellite captured this clear view of the Antarctic Peninsula, the Larsen Ice shelf and the sea ice covered waters around the region. The Peninsula stands out as the raised terrain amidst the ice from the lower left to upper middle of the image.

Ninety-eight percent of Antarctica is covered in ice. The Antarctic Peninsula, the northernmost tip of the continent, is essentially a mountain range mostly covered by that ice. In fact, the range is considered an extension of the Andes Mountains in South America, with a ridge that runs along the seafloor between them. Summer warming can melt and expose the flanks of some of Peninsula mountains, and the region has experienced significant warming in recent decades. The steep terrain also lends itself to glacial flows down into the Larsen Ice Shelf.

On Oct. 12, 2011, NASA’s DC-8 aircraft flew from Punta Arenas, Chile, across the Antarctic Peninsula and Weddell Sea, and back to Chile—making two 1,700-kilometer transects from east to west across the region. Several early flights in the 2011 campaign will take the team over sea ice near the Antarctic Peninsula before too much of it melts in the southern spring. Scientists are trying to understand why sea ice in the Southern Hemisphere is not following the steady decline of sea ice thickness and extent observed in the Arctic.

In the IceBridge mission blog, scientist Michael Studinger wrote about the Oct. 12 flight: “It’s like flying from Chicago to Miami and back, at 1,500 feet above the ground…There is not a single weather station in the Weddell Sea or nearby to provide observations we could use to confirm the weather model predictions. Imagine needing to rely on a forecast that has no weather data between Chicago and Miami.”

“This mission is an exact repeat of two missions that we have flown in 2009 and 2010,” Studinger added. “The goal is to measure how much sea ice is being exported through the ‘gate’ connecting the tip of the Antarctic Peninsula with Cape Norvegia, and to determine the changes that occur over time. The export of sea ice from this area is a major contributor to the total ice volume exported into the Antarctic Circumpolar Current.”

NASA’s Operation IceBridge is designed to continue critical ice sheet measurements for the next few years between the end of the ICESat I and the launch of ICESat II in 2016. Researchers make instrumented flights to Greenland and the Arctic each March through May, and over Antarctica each October and November. Many flight lines retrace previous ICESat-1 tracks or future ICESat-2 tracks. Some also align with current observations made by the European Space Agency’s CryoSat-2 satellite.

The overlapping flight lines and satellite tracks help scientists improve the accuracy of their data. Scientists are concerned about how quickly key glaciers and ice shelves are thinning. Better understanding this type of change is crucial to projecting impacts like sea-level rise.