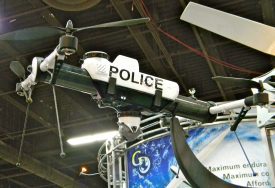 The Grand Forks agency collaborates with the University of North Dakota school of aerospace sciences to operate its UASs and uses the AeroVironment Qube and Draganfly Innovations’ Draganflyer small rotary-wing aircraft. It has deployed its UAS unit nine times since May 2013 on incidents ranging from documenting serious traffic accidents to searching for wanted suspects.