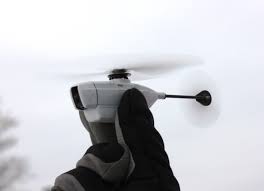 Prox Dyanmics' camouflage-gray Black Hornet weighs just 16 grams, is 10 centimeters long and has a 4-inch rotor span. Designed for infantry units, the aircraft is equipped with a nano-camera capable of sending back high-definition motion video or still images to its operator via a tablet-size LCD screen.

Nordic nano-UAS producers Prox Dynamics and CybAero are taking a somewhat different route to that of larger global competitors, which are developing more offensive UASs. The two companies are designing and producing smaller, unarmed nano-UASs that are virtually invisible, silent and difficult to neutralize.

Prox Dynamics' nano-sized Black Hornet, which has been developed in cooperation with the state-funded Norwegian Defense Research Establishment (NDRE), already has been sold to the British and Norwegian armies.

We have found the ideal partner, said CybAero CEO Leif Erlandsson. AeroVironment has delivered over 22,000 hand-operated fixed wing [UASs]. Eighty-five percent of all [UASs] used by U.S. armed forces are supplied by AeroVironment. Our cooperation agreement covers the United States, NATO and a number of other markets.

Under the agreement, AeroVironment will use CybAero's current product APID 60 in the UAS systems it sells to the U.S. military.