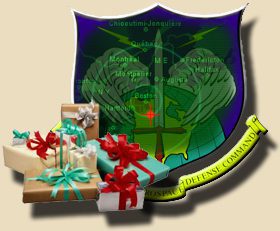 The NORAD Tracks Santa website (see link at bottom of story) now is live and features a Countdown Calendar, a Kid's Countdown Village complete with holiday games and activities that change daily, and video messages from students and troops from around the world.

With the addition of Brazilian Portuguese, the website is now available in eight languages: English, French, Spanish, German, Italian, Japanese, Brazilian Portuguese and Chinese. This year, using free apps in the Apple iTunes Store and in the Android Market, parents and children can count down the days until Santa's take off on their smart phones!

Tracking opportunities are also offered on Facebook, Google+, YouTube and Twitter. Santa followers just need to type @noradsanta into each search engine to get started. Starting atmidnightMST on Dec. 24, website visitors can watch Santa as he makes all the preparations for his flight. Then, at ¨4 a.m. MST (6 a.m. EST), trackers worldwide can talk to a live phone operator to inquire about Santa's whereabouts by dialing the toll-free number 1-877-Hi-NORAD (1-877-446-6723) or by sending an email to noradtrackssanta@gmail.com. NORAD's Santa Cams will also stream videos as Santa makes his way over various locations worldwide.

It all started in 1955 when a local media ad directed kids to call Santa direct“only the number was misprinted. Instead of reaching Santa, the phone rang through to the Crew Commander on duty at the Continental Air Defense Command Operations Center. Thus began the tradition that NORAD has carried on since it was created in 1958.