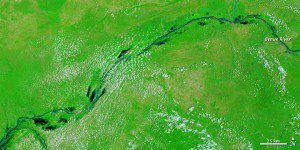 In 2009, the Benue River was a relatively thin river bordered by small, isolated water bodies.

NASA's Terra satellite shows the intense flooding along the Benue River, which claimed 137 lives and forced thousands more to relocate from July through September 2012.

In addition to the challenges posed by heavy rains, Nigerians had to cope with the release of water from the Lagdo Dam in neighboring Cameroon, which further swelled the Benue River. Flooding from the dam release was blamed for 30 deaths in Nigeria, according to Agence France-Presse. 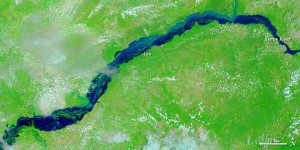 In this Sept. 8, 2012, image, the Benue River had spilled over its banks, engulfing the small lakes on either side. Flood waters often carry heavy loads of sediment, and such sediment might account for the relatively light shades of blue along part of the river.

These NASA images show a stretch of the Benue River in eastern Nigeria, around the city of Lau, before and after flooding occurred. The images use a combination of visible and infrared light to better distinguish between water and land. Water varies from electric blue to navy, vegetation is bright green and clouds range in color from nearly white to pale blue-green.